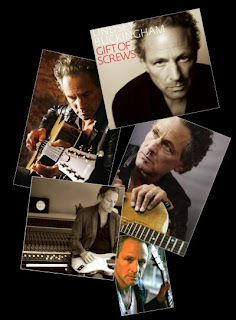 DETROIT (Billboard) - Fleetwood Mac guitarist Lindsey Buckingham is getting ready to hit the road to promote a new album he considers "a little more accessible and familiar" than some of his other solo releases.

"Gift of Screws" (Reprise/Warner Bros.) comes out on September 16, while Buckingham begins a six-week tour on September 7 in Saratoga, Calif. A special promotion bundles a copy of the album with ticket purchases for the tour.

The album marks the followup to 2005's acoustic-oriented "Under the Skin," which peaked at No. 80 on the Billboard 200. But the new set has an interesting history that dates back to the beginning of the decade.

Buckingham was making a solo album with the "Gift of Screws" title in 2001 when Fleetwood Mac decided to reconvene for sessions that led to the band's 2003 album "Say You Will" and subsequent world tour. Buckingham allowed the group to use several of the songs intended for his album -- with, he hastens to explain, no regrets on his part.

"It's happened maybe five other times in the past that the machinery or the politics of Fleetwood Mac moved in, intervened and something was put on the shelf," says Buckingham, who joined the group with then-girlfriend Stevie Nicks in 1974, left in 1987 and rejoined for "The Dance" in 1997.

"So that's been a pattern. It's always seemed to me that's the right thing to do. 'Gift of Screws' as an album wasn't really finished, so I was trying to do the right thing for the good of the whole."

Buckingham's initial "Gift of Screws" recordings have been widely bootlegged, and the current version includes several of those songs, among them the title track, "Right Place to Fade" and "Wait for You." The first single is "Did You Miss Me."

"I didn't really go in there and plan to make a rocking album," says Buckingham, who produced all but two of the 10 songs. "For whatever reason, this seems to hearken back to earlier work, Fleetwood Mac in particular. I think that's something the record company recognizes and feels good about."

The Fleetwood Mac rhythm section of Mick Fleetwood and John McVie, who helped out during the original sessions, still appear on the album. Also on the disc are the musicians who accompanied Buckingham on his "Under the Skin" tour and appear on the "Live at the Bass Performance Hall" CD/DVD that was released earlier this year.

As for Fleetwood Mac, a tour and possibly some new recording loom in early 2009.
Nickslive at Friday, August 29, 2008
Share