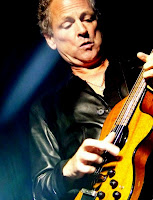 Lindsey Buckingham's career is two halves of the same whole.

There's the singer-songwriter-guitarist with the more "commercial venture," as he called legendary rock band Fleetwood Mac last night during a solo show at The Music Hall.

And then there's his more "esoteric, left side of the palette" solo career -- again his words -- whose discography was most recently expanded by the mid-September release of the rock-oriented Gift of Screws, which actually boasts a catchy first single in the form of Did You Miss Me which was included in his set list.

The 59-year-old guitar virtuoso managed to show off both sides of his impressive 35-year-plus career in equal and crowd pleasing measure during a lively two-hour show which saw him backed by a crack three piece of bass-keyboards-guitar (Brett Tuttle), guitar (Neale Heywood) and drums (Alfredo Reyes). Opening with the new songs, Great Day and Love Runs Deeper, Buckingham hit his stride vocally with the older solo tracks, Trouble, and Go Insane, but it was the Fleetwood Mac songs, Tusk (complete with blue strobe lights) and I Know I'm Not Wrong, that really kicked the show up another notch and standing ovation after standing ovation started to come his way.

The singer-guitarist was also an engaging solo performer during a standout acoustic set made up of the beautiful Never Going Back Again, the dramatic Big Love and the intense Shut Us Down.

Often Buckingham stood with his head back, his eyes closed and his mouth wide open while he played, seemingly lost in his own world while he freely exposed his emotions.

And when he talked about the tumultuous time in his life that he wrote Big Love, just before he left Fleetwood Mac for a time in the '80s "to get my sanity back," he admitted the lyrics of "looking out for love," have now been put firmly in the past after meeting his wife eleven years ago with whom he now has three kids.

The biggest applause often came for Fleetwood Mac songs like World Turning -- which featured one of the strangest drum solos I've ever seen by the nonetheless talented Reyes -- Come (not a great song but completely elevated by Buckingham's awesome playing), I'm So Afraid, Go Your Own Way and Second Hand News, the last two which saw people finally streaming to the front of the stage to clap and sing along and even touch Buckingham's guitar strings.

And when Buckingham did his long band introductions, it was clear he had a genuine affection for the trio, particularly Heywood who he's known since his "crazy Malibu days."

"I'm having flashbacks of Gary Busey and Nick Nolte -- it's a strange crowd there," joked the slim and youthful looking Buckingham, dressed in a black leather jacket, black shirt, jeans, and black cowboy boots.