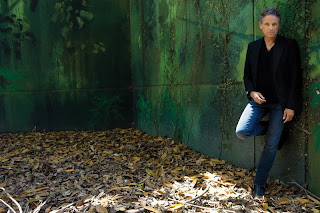 "It's often better to be in chains than to be free." - Franz Kafka

"Chain, keep us together" - Stevie Nicks

'Probably I would never make Fleetwood Mac albums at all," says Lindsey Buckingham, before adopting an Al Pacino Godfather III rasp, "but it's like 'You're dragging me back into it.' " The Go Your Own Way singer, in town for a concert last night in Hamilton and a sold-out one this evening at The Music Hall, is speaking of the push and pull between his dual careers as a solo artist and the Fleetwood Mac front man. Or maybe that's not what he's referring to. Because as Buckingham points out, not in any prickly way mind you, he's being asked a good number of Fleetwood Mac questions. "It's okay, though" he says, "you fall back on what you know."

Speaking to the man with regard to his latest solo album, Gift of Screws, it's hard not to think about the band that still occupies a fair bit of his time. Fleetwood Mac, a complicated group of Brit bluesers and So-Cal pop-rockers (including Buckingham's scarf-wearing former lover Stevie Nicks) are regrouping for the first time since 2004, with rehearsals likely to begin early next year for a spring go-round. "We'll see how that goes," Buckingham shrugs, "and we'll probably make another album at some point."

And yes, a few songs from Gift of Screws, unlike 2006's acoustic Under the Skin, have that familiar bouncy Mac style. In fact, three of them (the bluesy Wait for You, The Right Place to Fade and the title track) originate from recording sessions with group namesakes Mick Fleetwood and John McVie in the 1990s. Other material from those sessions ended up on Fleetwood Mac's last album, 2003's Say You Will.

But in addition to the familiar sound of the songs, the lyrics often address the confusing rock-star life that Buckingham led while in a band he first left in 1987. The trickling acoustic Bel Air Rain has the candid reflection, "In my younger days, I was mistaken for a whore/ I guess you can say I lived in shame."

Buckingham, greying but fighting-weight thin at the age of 59, protests (a little bit) that the songs are just generally about success and the pressure to repeat it, but he does admits that Bel Air Rain refers to the stressed post-Rumours period of the late 1970s and 1980s. "They want to put a name brand on you and a set of labels," he explains, referring to record companies. "They want you to adhere to that, and not to go outside of that. That was very clear to me."

Buckingham's artistic reaction to the pressure - we won't go into the pharmaceutical response - was to make Fleetwood Mac's Tusk, an extravagant epic from 1979 that was in many ways a Buckingham solo album. "There were so many things that were exciting me," he says, perking up. "Let's take some risks, let's challenge people." (And, let's rent Dodger Stadium and hire the University of Southern California marching band to play on the title track.) After Tusk, Buckingham eventually began living two musical lives: one, that of the rock icon, for Fleetwood Mac projects; the other, the idiosyncratic cult hero, for his more "esoteric" solo albums. The "big machine" allows for the "little machine" to plug along. "You go through all these things in order to try and walk the line that you want to walk," he says. "With my solo albums, I'm not doing it for somebody else's expectations. You have no expectations of what's going to happen with it, beyond turning it in."

Buckingham is fine with the intermittent tugs from his loose Fleetwood Mac shackles. "It's good," he says, enthusiastically enough. "It's nice to know that that's there." And while he allows that the band members are miles apart in so many conflicting ways, there's something to be said for occasional incompatibility. "There's synergy in diversity."

That kind of mature realization is reflected in Gift of Screws, an album sounding a little like Fleetwood Mac, but from a man wiser for the time without the band. "It's about anybody who ever has to go through that level of success," he says, referring again to Bel Air Rain, "and still try to come out knowing who you are."
Nickslive at Thursday, October 09, 2008
Share