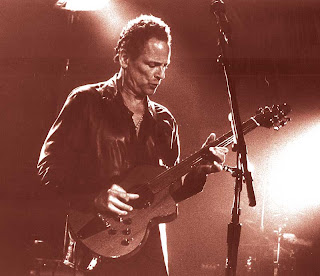 When Lindsey Buckingham and Stevie Nicks joined Fleetwood Mac in 1974, nobody could expect much. Doe-eyed, fresh-faced and hippiefied Buckingham/Nicks had already released an album that went nowhere while the Mac—a British blues band— was seemingly on its last legs. The success of Nicks' witchy Rhiannon caught everyone by surprise but the sleeper 1975 smash Fleetwood Mac prepared no one for the monster 1977 album Rumours. The rest is history ( including breakups, diva attitudes, drugs, divorce, infidelities, booze, jealousy, and an unbroken string of sellout tours and multi-platinum albums ) , but a distinct history nonetheless. In retrospect, no one has had the legs that the Mac has had, and now that Nicks' charm has curdled into schtick it's as plain as day how much Buckingham brought to the table of L.A. rock. After one listen to ‘79's Tusk or his out-there rave-ups on ‘80's Live, it was obvious that the man was a demented wizard or possessed by aliens from another galaxy ... or both.

Part ferocious bluesman, part nutty professor and part post-summer Beach Boy, Buckingham was the wild card that gave the Mac its idyosyncratic flavor and bite. While Nicks kept a higher profile, Buckingham—the other dominant personality in the band and, by far, the most creative—released solo albums of such wayward personality and oddball charisma that he seemed at times, well, nutty. Granted, Go Insane had the clicking heart of Oz's tin man, but Buckingham's studio tinkering took years and could only be called obsessive. ( If the idea of a grown man, albeit a very rich one, tapping out the percussion for a song with two pencils on a box of Kleenex on his bathroom floor with a $20,000 mircrophone dosen't strike you as “obsessive,” I don't know what will. ) As a result, there's a certain closed-in quality on his projects that feels airtight and joyless. A decade of happy matrimony and a brood of his own kids seem to have put some rosiness back in his cheeks and opened up his music by degrees.

His new Gift of Screws, like his four previous solo efforts, is bullish on personality, shot through with a punchy eccentricity, but surprisingly quirk free and emotionally direct. The tone of Screws is a regret-free wistfulness that sounds almost nostalgic. The opener, Great Day, is equal parts syncopated percussion and clenched vocals spiked with jagged guitar blasts. Love Runs Deeper and Gift of Screws have an even bigger assault—there's no way that the Mac could contain this fury. The obvious gem here is Did You Miss Me?—a lilting valentine of such fragmented aching that it sounds like the oncoming of autumn.

Buckingham's packed Oct. 2 show at House of Blues put Screws and all of his music in a different context. Without the safe confines of a cushy studio, Trouble, Did You Miss Me? and Big Love were more plaintive and earthbound. Mac staples Never Going Back Again and World Turning got reworked and turned on their heads—the latter even flipped backwards and almost unrecognizable. A positively fierce Tusk shook the rafters in a way that the Mac never could muster but I'm So Afraid tipped the show in another direction. Buckingham sank into it with a steady conviction, but where the Live version was a weighed-down snarling affair of shrieking pain and fury, his guitar solo here was nimble, fleet and even transcendent. Shorn of its danger and pain, he turned it into something almost hallucinatory and light.

If Buckingham can live through the uber-fame of the Mac's ongoing existence, live a new life and do it without the bitterness and artistic slop that tends to cling to rock megastars, then I guess there's hope for all of us.
Nickslive at Thursday, October 09, 2008
Share