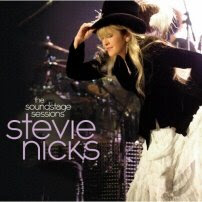 Bloomberg Arts and Cultural Reviewer Mark Beech has a stack of Advance Releases to go through over the holidays... One of them is a cd by Stevie Nicks. Could this be the Live Chicago Soundstage cd that's been bounced around as far as release dates goes and is expected in March, 2009? Or is this now back on the January release schedule? Or am I miss-reading this?

**UPDATE**
RAL250 (see comments) contacted Mark Beech who double checked with Stevie's Record Company (Warner Bros.) and the record company confimed with him that the release date is in fact March, 2009.

I’ll spend Christmas listening to Santogold’s “Santogold” (Downtown) -- a strange brew of synths and soul -- and “Welcome to Mali” (Because Music) by Amadou & Mariam, a world-music gem. There’s also a stack of advance releases. January sees new CDs from Stevie Nicks, Antony & the Johnsons, Kylie Minogue, Franz Ferdinand and Bruce Springsteen. Next year may be even better.
Nickslive at Wednesday, December 17, 2008
Share