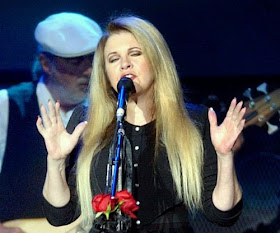 BRAD WHEELER
Globe and Mail
February 11, 2009
"We wish we didn't have to charge anything,” says Stevie Nicks, Fleetwood Mac singer. “We wish we could go out and play. That's what we do – we're performance artists.”

Rock on, gold dust woman. During a teleconference Tuesday, Nicks and her fellow Mac mates were chatting up their upcoming North American tour (which kicks off March 1 in Pittsburgh, with dates in Ottawa, Montreal, Toronto, Calgary, Edmonton and Vancouver to follow) when the subject of ticket prices came up. Fleetwood Mac, legendary for its rock-star indulgences in its prime, charge up to $149.50 for top seats in Toronto.
“The price of life in general is a gazillion dollars more than it was four years ago,” reasoned Nicks, not an economist. The British/Californian band's most recent tour wrapped up in 2004. “Our emotions are about trying to do this in the best way that makes sense for our audience,” chimed in drummer Mick Fleetwood, “and in a way that we can get to our audience.”
Ticket prices and ticket distribution are a touchy subject these days. A $510-million Canadian class-action suit filed this week alleges that Ticketmaster and subsidiary TicketsNow.com are conspiring to hold seats from the public and reselling the tickets at a higher prices – seemingly a violation of anti-scalping laws.
Those looking for Fleetwood Mac seats for the Air Canada Centre show on Ticketmaster.ca are able to pay face value, but also are offered “Official Platinum Seats” at the site's Marketplace, where concertgoers can purchase premium seats at inflated values – as much as $800 a ticket.
The band is represented by Irving Azoff, who also happens to be chief executive officer of Ticketmaster Entertainment, and will become executive chairman of Live Nation Entertainment if the just-announced merger of Ticketmaster and concert promoters Live Nation goes through. Asked about any unsavoury ticket-selling practices involving Fleetwood Mac, Nicks promised she would be “making phone calls” on the matter.
Nicks went to say that tour's “Unleashed” title refers to the unleashing of the band's furies “back into the universe.” Asked if the public would be able to handle all the pent-up rage, Nicks answered in the affirmative, but cautioned that fans might need to bring their “armour.”
That, and their gold card.
Nickslive at Wednesday, February 11, 2009
Share