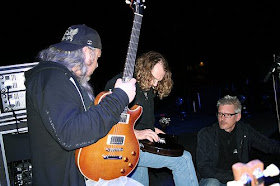 (From left) Roy Kelley, Neale Heywood's guitar tech, is holdin the Schroeder Tweedburst Radio Lane; Stan LaMendola, Lindsey Buckingham's guitar tech, is examining the back for Ryan Merkley's Schroeder Chopper, Kurt (on the right) looks on. He is Brett Tuggle's Guitar tech. The very tip of Neale's Monk guitar is in the foreground. 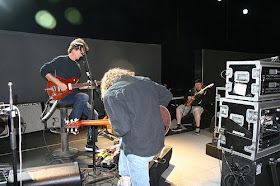 Jason Schroeder of Schroeder Guitars has been working with Neale Heywood of Fleetwood Mac to get him some guitars for the upcoming tour that begins in March. Here are a few pics
Note:  Lindsey Buckingham can be seen in the background of one of the photos. 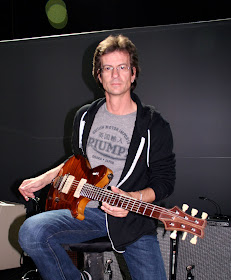