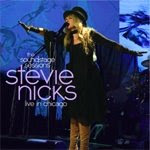 NEW COVER INCLUDES LITHOGRAPH
SIGNED BY STEVIE NICKS
A little something in the mailbox today from Warner Brothers.  Aside from being surprised that I received something from the record company, there are a couple of other perplexing things to note about this announcement:
Here's the announcement:
Tune in to PBS tonight and pre-order the new CD/DVD now!
This stunning HDTV, Dolby Stereo performance, captures a radiant Stevie Nicks in her first filmed solo performance since 1987, Airing tonight and throughout the weekend. Check your local PBS affiliate at the following for airdates and times.
Stevie's epic Soundstage Sessions concert in Chicago!
The DVD features over 2 hours of stunning footage from this legendary concert! The CD includes brand new studio versions of classics like "Stand Back", "Sara", "Landslide" and MANY, MANY MORE! The first handful to order this STEVIE NICKS LIMITED EDITION CD/DVD SET will receive a lithograph personally signed by Stevie Nicks! Click HERE to Pre-Order now!
And again... Here's the trailer: