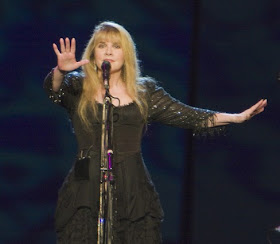 "It still gives me goose bumps, and it still makes the hairs on the back of my neck stand up," says Stevie Nicks, who is eagerly anticipating the first Fleetwood Mac tour in five years, which kicks off on March 1st in Pittsburgh. And later in the month, Nicks is releasing a DVD, Live in Chicago, and a concert CD, The Soundstage Sessions. With her dog barking in the background, Nicks checks in from her home in Los Angeles: "We still feel like Fleetwood Mac have a lot to give to the world. In this time of trouble and turmoil, I think the world needs Fleetwood Mac."
What's the latest from the Mac rehearsals?
I don't want to give the set list away, but it's pretty exciting. The fact that we haven't been on tour since 2004 makes every song sound fresh. It's just bang, bang, bang- all fantastic songs. We always start with the staples: "Go Your Own Way," "Gold Dust Woman," "Rhiannon" and "Dreams." We will play one song we've never done at all. If I were going to see Fleetwood Mac, this is definitely the set I'd want to see. It's like a big steam locomotive that doesn't stop until
we walk offstage.
How are you getting along with Lindsey Buckingham?
When Lindsey and I aren't getting along, nobody's getting along. We haven't had one disagreement since we started rehearsing. And instead of treating me like his miserable old ex, he's treating me like his difficult but beloved older daughter. He's been very sweet. 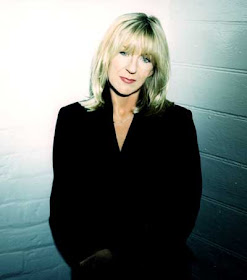 How often do you speak with Christine McVie?
We check in with each other, but we can't hang out, because she lives in England, and she won't fly. The only time I've seen Chris since 1998 was when we did three nights in London in 2003. I miss her every day. But we've all finally started to accept that nothing could make Chris go back out on the road.
Last May you turned 60. How do you feel about that?
I don't feel any different at 60 than I felt at 50. Age is a state of mind. You can either get old or not get old.
On the "Live in Chicago" DVD you're joined by Vanessa Carlton on a couple of songs. What other artists of her generation do you mentor?
I love Vanessa - I feel like she's an adopted child, in a way. And Michelle Branch and I had dinner the night before last. I have a lot of information for all of these women. I should do a "Dear Stevie" column in Rolling Stone. When Mariah Carey was going through her craziness a few years ago, I wrote her a long letter telling her how everybody else is crazy - not her. I saw her recently, and she told me she keeps the letter with her jewelry! I love that.
What's wrong with the record business today?
The internet has destroyed it. I miss buying an album and lying on the floor for three days and going over it with a magnifying glass. I still go to the record store and spend hours there and buy a big bag of CDs. I don't have a computer of a cellphone, because I don't want to be that available to anybody. I'm all about mystery. Little girls think it's necessary to put all their business on MySpace and Facebook, and I think it's a shame.
You've always made mix-tapes on cassette. Do you still do that?
That's how I do it. Cassettes sound so much better. And I'm deaf as a doornail, so I like to crank my little boombox.
What songs are worthy of a Stevie Nicks mixtape?
I was just in Hawaii, and I made a mix called "Lahaina Twilight." It's got songs by the Goo Goo Dolls, Jackson Browne, Sting, Coldplay, Tom Petty, the Fray, Snow Patrol.
What albums do you love in their entirety?
I don't, usually. In the beginning, I was inspired by songwriters like Jackson Browne, David Crosby, the Eagles, Neil Young, Buffalo Springfiled - those are the people I learned from. And I probably listed to Joni Mitchell's For the Roses, Blue and Court and Spark a hundred million times. But now, I can't listen to a whole album unless it's a Fleetwood Mac record, where I made sure that every song is spectacular. Sequencing is my forte. I sequenced Rumours. Lindsey doesn't like to admit it, but he will admit it.
Last year, Sheryl Crow claimed that she would be part of the 2009 Fleetwood Mac tour, but Buckingham later denied it. What really happened?
It was absolutely discussed and she was absolutely invited to join. The reason was because I missed Christine [McVie] so much, and I wanted another woman in the band - it's hard to be in the boys' club. I explained to Sheryl what it was like to be in the group - that it's all-encompassing. Like, on 2003's Say You Will tour, we went out expecting to do 40 shows, and it turned into 135 shows. So Sheryl called me and said, "I'll have to pass." As Stevie Nicks, I was disappointed. As her friend, I told her she made the right decision. Sheryl Crow passed on Fleetwood Mac - I want that out there.
What are the origins of your patented onstage twirl?
A lot of ballet and a lot of dance. I wanted to be a ballerina, but I realized I was not going to be Pavlova, so I became a rock singer instead.
Nickslive at Thursday, February 19, 2009
Share