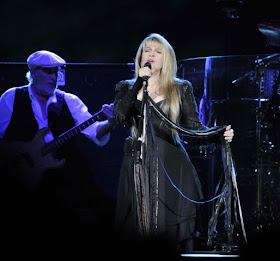 
"Unleashed" seems like a very odd title for a Fleetwood Mac tour. "Unleashed" is a word that suggests risk and danger — even the possibility of violence. That might be appropriate for an Yngwie Malmsteen concert, perhaps, or a Satanic Slaughter comeback tour, but Fleetwood Mac? Unleashed by who — and to do what? Shake their jewelry at us? A greatest-hits tour by a band who, decades after their heyday, remain one of the best-selling, most iconic and recognizable groups in the world — that's hardly a risk-filled proposition. (Unleashed by their accountants, perhaps.)

Still, it's great to have them back. And I suppose the concert was ferocious enough to just about deserve that "Unleashed" moniker. The band started, unfortunately, with the night's three worst performances, with Lindsay Buckingham faltering on the lyrics to the very first line of "Monday Morning," and the mix sounding abysmally echo-y and indistinct — as it would, with intermittent exceptions, for the entire evening. "The Chain," which followed, was just as stumblebum, with John McVie fluffing the cue to the bass riff at the start of Buckingham's guitar solo. (Don't worry, John, it's only the most important part of the song.) When Stevie Nicks then promised to finally "get this party started," only to respond with an off-key, pudding-paced "DREAMS," you felt the audience starting to brace for the worst.

Thankfully, things improved in drastic fashion with "I Know I'm Not Wrong," the first of several numbers from the Mac's seminal Tusk double album. When the band said this was a greatest-hits tour, they weren't kidding — save for "Gyspy" and "Big Love" (from Mirage and Tango in The Night, respectively), two numbers from Buckingham and Nicks's solo careers ("Go Insane" and "Stand Back"), and a cracking performance of Peter Green's "Oh Well (Part 1)," the band stuck entirely to the three records that made their name in the 1970s: their self-titled 1975 album, Tusk, and — of course — Rumours.

You would have thought that Nicks, with her drapes and scarves and bangles and glitter and multiple costume changes (I counted four, including a last-minute encore change into a pair of knee-high white pointy-heeled boots) would have dominated the concert, but in fact Buckingham provided most of the gig's most memorable moments: scissor kicking and primal-yelping with glee at the end of several songs, and indulging in a sublimely wanky, seven-minute (!) guitar odyssey during "I'm So Afraid," a solo that only appeared to end because he ran out of high notes to play on his fretboard.

Nicks, on the other hand, had to pace herself — not worrying about hitting the high notes on her first few songs, then going ballistic by the time the band reached "Sara" and "Gold Dust Woman" later in the set. Christine McVie, who last played with the band in 1998, opted once again out of performing this year, and while her absence was obvious on the group's last record, Say You Will — she's essentially the McCartney to Buckingham and Nicks's Lennon — she wasn't missed tonight, with Buckingham and Nicks providing creditable vocal turns on two of her songs, "Say You Love Me" and a predictable (if well-performed and received) encore of "Don't Stop."

"The 'Mac is back!" Mick Fleetwood yelled at the end of the show (dressed, for some reason, in red shoes and knickerbockers) — and they certainly were. Just for once during this financial crisis, let's raise a toast to accountants.
Nickslive at Wednesday, March 18, 2009
Share