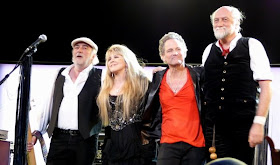 
Last Wednesday night, Fleetwood Mac brought their Unleashed tour to the TD Banknorth Garden in Boston. The tour marks the first time the group has been on the road since 2004. The band, currently a quartet, includes singer/guitarist Lindsey Buckingham, singer Stevie Nicks, bassist John McVie, and drummer Mick Fleetwood.

Fleetwood Mac kicked off their set with "Monday Morning," an upbeat song about Buckingham's frustration with love that dates back to the group's self-titled 1975 album. Without missing a beat, the band launched into "The Chain," a song that found Buckingham and Nicks sublimely combining their voices with urgent intensity. Half-way through, the song transitioned into an increasingly faster section marked by an ominous bass-line and an unrestrained guitar solo.

While Nicks' voice seemed to struggle slightly on songs like "Gypsy" and "Rhiannon," there were other times where it was nothing short of outstanding. Her rendition of "Landslide" was just about perfect. "Gold Dust Woman," a song chronicling her past struggles with cocaine, demonstrated that she is at her most powerful and haunting when harmonizing with former lover Buckingham. Donned in flowing dresses, scarves, top hats, and other eccentric pieces of clothing, Nicks twirled about the stage like it was 1977, a move that would have been more ridiculous if the 60-year old singer did not look so remarkably youthful.