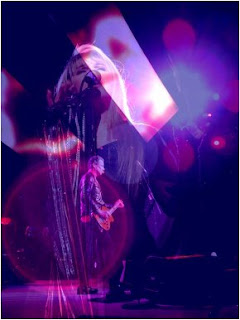 BY LYNN SAXBERG, THE OTTAWA CITIZEN


OTTAWA — Fleetwood Mac finally landed in Ottawa last night, a couple of decades past their heyday, but didn’t take long to remind an audience of 14,000 why they were everyone’s favourite band way back when.

So what if the configuration of the group wasn’t exactly the same as it was in the late 70s. The concert was still an unabashed nostalgia fest, consisting largely of songs from the band’s golden days. “There’s no new album to promote … yet,” Lindsey Buckingham teased the crowd early in the evening. “This time we said ‘Let’s just go out and have fun.’ Let’s do the songs we all love and hopefully that’s the thing that you love as well,” he added.

Sure enough, the veteran musicians looked like they were having almost as much fun as the fans who packed Scotiabank Place. A rock-solid version of Monday Morning immediately established a groove that was heavier than expected from the soft-rock superstars. Bass and drums blazing, it was a potent reminder of the awesome power of the rhythm section that provides the band’s name, that of drummer Mick Fleetwood and bassist John McVie.

However, as the concert unfolded, over the next two-plus hours, it became clear that Fleetwood Mac is, at its heart, a Buckingham-Nicks project. Singer-guitarist Buckingham and singer Stevie Nicks traded lead vocals, and shared the duty of chatting with the audience. There were small signs of warmth between them but few actual sparks. Even when Nicks put her head on Buckingham’s shoulder, no one was fooled.

To fill in a bit of Mac history here, singer Stevie Nicks and guitarist Buckingham were lovers when they first joined the band in the mid-70s, and many of the songs on the classic 1977 LP, Rumours, were inspired by their break-up (as well as the divorce of McVie and his wife, singer Christine, who chose not to take part in this reunion tour). As Buckingham said last night, those were “complex and convoluted times.” 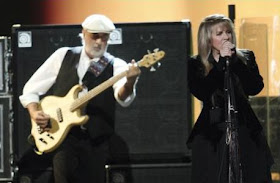 Rumours was a landmark album, ample proof that complicated emotional situations make for the best songs. Although relationships can go sour, the best songs stand the test of time. With every selection from Rumours, including The Chain, Dreams, Second Hand News, Go Your Own Way and Don’t Stop, the band dug in, rocked out and had no problem reclaiming the original passion of the times, to the delight of the audience.

Both Buckingham and Nicks were in fine form, ageless in appearance, their voices as strong as ever. Nicks wore her blond hair long and sleek, had scarves hanging from her microphone stand and twirled her shawl on stage, her voice haunting. Buckingham dazzled on guitar, exploring the softer side during an acoustic version of Never Going Back Again but then working up to some full-out electric soloing for Go Your Own Way.

Backing the core quartet on stage were a couple of extra instrumentalists and a trio of female backing singers.
Nickslive at Tuesday, March 24, 2009
Share