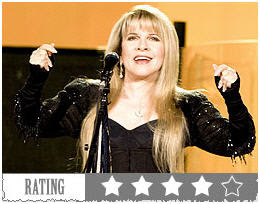 
OTTAWA - Not they don't still look pretty darn good, but listening to Fleetwood Mac and wondering who's sleeping with who just doesn't have the same appeal as it did 30 years ago.

Did Stevie Nicks and Mick Fleetwood get it on before the show? Who cares? Probably not even Lindsey Buckingham.

He's already told her to go her own way. She went.

But she's back, again, still sexy at 60. They were all back last night at Scotiabank Place. All except Christine McVie, who declined to join her ex -- bassist John McVie -- and the four other bandmates for the tour, which kicked off March 1 in Pittsburgh and heads to Montreal tonight and Toronto on Thursday.

That left Nicks as the only woman in the band that became known in the 1970s as much for their tangled love lives as their chart-toppping hits.

"As you know, Fleetwood Mac has a convoluted and emotional history," Buckingham wink-winked to the 14,000 fans last night.

Yes, we know. Their 1978 Grammy-winning album, Rumours, filled us in. Stevie-Lindsay, Mick-Stevie, John-Christine, Christine-lighting guy-etc. It's what gave songs like Go Your Own Way, Second Hand News and Dreams an almost voyeuristic feel.

Anyway, time heals all wounds. As Buckingham said last night, "We take breaks, long breaks, and every time we reconvene it's a little different. This time, we just said let's go out and have some fun."

They stuck to the plan last night. On drums, Fleetwood -- the ponytail, so prominent on the Rumours album cover, now grey -- sported a perma-grin. Buckingham teased the crowd by hinting at an upcoming album. "With no album to promote -- yet," he said, "we thought we'd sing the songs we all love."

And Nicks was warm and engaging in her black top and grey skirt -- and later, ruby dress and gold shawl, and even later, black dress and top hat -- that flowed when she swayed and twirled in that familiar hippie-like dance.

Proof of the reconciliation was in the encore. Stevie's Silver Springs, which reportedly caused a row when Mick cut it from Rumours, was the closer last night. Apology apparently accepted.

So while there may not have been much sexual tension on stage last night -- Stevie did lay her head tenderly on Lindsay's shoulder at the end of Sara -- there was plenty of good music. The songs stand up on their own, without the "convoluted history."

They sang most of their greatest hits last night, but not all. They couldn't, not without Christine. Over My Head, You Make Lovin' Fun, and Little Lies wouldn't be the same without her distinct lead vocals. Nicks and Buckingham attempted Say That You Love Me, which was sung by McVie on their self-titled album, but it didn't sound quite right. Nicks fared better on the second verse of Don't Stop, which was McVie's. But, hey, if Bill Clinton could sing it during his 1993 presidential campaign, anybody can.

Regardless, Nicks and Buckingham sing vocals on enough Fleetwood Mac hits to easily fill out a three-hour concert. If it was Nicks, instead, who wasn't there, they wouldn't have attempted Rhiannon, Gypsy and certainly not her solo hit, Stand Back.

And that was a pretty good tradeoff.
Nickslive at Tuesday, March 24, 2009
Share