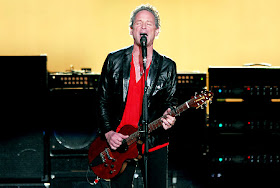 Family dynamics never cease to fascinate us - especially ones with histories as incestuous as Fleetwood Mac's.

It should surprise no one, then, that the band's show at Madison Square Garden last night proved as musically vital, and as alive with subtext, as ever. This, despite the fact that the band had no new music to play, instead drawing most of the material from wells filled more than 30 years ago.

The current "Unleashed" tour represents the band's second since singer/songwriter Christine McVie bailed. So, naturally, the defection has thrown a harder light on the complex interplay between Lindsey Buckingham and Stevie Nicks.

Their songs threaded in and out of each other at last night's show just as the lives of these former lovers have. "Gypsy," Nicks' tale of emotional independence, played off Buckingham's admission of neurotic excess, "Go Insane" - together serving as an on-going public confession of their mutual needs and deficiencies.

In "The Chain," the two harmonized about family bonds in a way that communicated less loyalty than threat. "You'll never break the chain," they brayed at each other. Consider these guys the original "reality show."

The loss of McVie has robbed the group - which also features John McVie and Mick Fleetwood - of its most diplomatic voice. And she was missed on the few numbers that originally featured her, like "Say You Love Me."

But as a happy consequence, the band rocked harder and found more room for Buckingham's fiendish guitar work. His obsessive arpeggios gave a richly tactile feel to "Big Love," while in "I'm So Afraid," he mined deep blues hues.

The group kept things frisky by tweaking the arrangements and the harmonies in many songs.
Buckingham delivered some with newly emphatic inflections.

But the night's emotional highlight struck a tender note. When Nicks sang her song of age and humility, "Landslide," she read the line "I'm getting older, too," with an acceptance that showed not an ounce of regret.

Some families, it seems, only grow more sure with age.