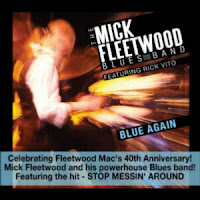 It’s not often you get a chance to talk to a legend, and the rather lanky sticks man behind Fleetwood Mac, Rock ’n’ Roll Hall of Famer Mick Fleetwood, is indeed a card-carrying member in the legendary set, having cut his teeth during the British blues explosion of the mid-’60s with John Mayall’s Bluesbreakers and then of course recording one of the biggest selling records of all time in 1977, Fleetwood Mac’s Rumours.
Now in his sixties, Fleetwood is feeling a little bit nostalgic these days, having managed to get Fleetwood Mac’s most famous line-up back on the road (well, almost—keyboardist Christine McVie chose to tend to her garden instead). Fleetwood’s on the cusp of seeing the Rumours deluxe edition re-released, and releasing the Mick Fleetwood Blues Band’s Blue Again!, which revisits all the original Fleetwood Mac blues classics.
“I really have nothing but amazing joy when I think of those days,” says Fleetwood. “We had such an amazing journey in such a short space of time, it blows my mind. I still consider myself more of a bluesman than a pop star and I think that the music we made back then still really holds up.”
CONTINUE
Nickslive at Friday, March 20, 2009
Share