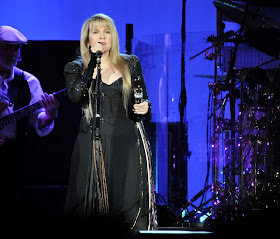 For a group that's conquered its demons, again and again, Fleetwood Mac sure does love to wallow in the memories.

No less than three times, during last night's Air Canada Centre show, either singer Stevie Nicks or guitarist Lindsey Buckingham, who do all the talking for the foursome rounded out by founding members, sneaker-shod bassist John McVie and ponytailed drummer Mick Fleetwood, alluded to the well-noted upheavals of the four decades-strong pop-rock group. These traumas included changing lineups – both Buckingham and Nicks departed for a time – and failed intraband marriages or romances.

But to hear the players tell it, these conflicts fuelled the songs and artistry that define them.

"Fleetwood Mac, as most of you know, has a complex and convoluted emotional history and it's actually turned out to be kind of cool," Buckingham said last night. Without a new album to push – "yet," he explained, the quartet was indulging themselves and fans with a 23-song, two-hour-and-20 minute hits concert, which drew heavily from 1977's Rumours – "Dreams," "Go Your Own Way," "The Chain," "Never Going Back" – and 1975's Fleetwood Mac – "Rhiannon," "Say You Love Me," "World Turning," "Landslide."

They also turned in a not previously toured tune, the moody, aptly titled "Storms" from 1979's Tusk, which allowed Nicks to again reference the group's peripatetic past – "it's a stormy song for stormy people and a stormy bunch of relationships and stormy problems."

She's actually the group's weakest component on this tour, which kicked off in Pittsburgh March 1 and returns to the ACC on the 26th.

If it weren't for that inimitable tremor in her voice, any female singer could've been substituted.

What Nicks lacked in energy and charisma, Buckingham delivered tenfold. He proved a crack showman whose fierce playing and vocal drama – replete with karate screams and maniacal laughter – was smoothly supported by Fleetwood's glee and tomahawk pounding and McVie's cool, steady groove.

And with a catalogue this deep – they didn't even get to "Everywhere" and "You Make Loving Fun" – it's great to have these sexagenarians back on the road after a five-year break.
Nickslive at Wednesday, March 18, 2009
Share