REVIEW: Fleetwood Mac Live in Toronto - Rolls Out The Hits 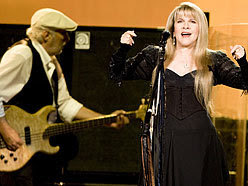 Fleetwood Mac rolls out the hits
Live in Toronto, ON at Air Canada Centre - March 17, 2009


It felt like the mid-to-late '70s all over again at the Air Canada Centre on Tuesday night as Fleetwood Mac's Greatest Hits - Unleashed tour pulled into the hockey hanger for the first of two shows on St. Patrick's Day.

And while the opening song, Monday Morning, wasn't a very smooth start to the two-hour-plus concert - singer-guitarist Lindsey Buckingham's first words weren't on microphone - and the followup tune, The Chain, sounded a bit disjointed and unpolished, the evening eventually picked up as the veteran rockers found a decent groove by the third number, Dreams.

"We are Fleetwood Mac, and we're thrilled to be here tonight. We hope you have a wonderful time. And now I think we should get this party started," said iconic singer Stevie Nicks, 60, decked out in her usual costume of flowing black dress and black suede boots with black scarves and silver chains decorating her microphone stand.

On their first tour together in five years, the band - rounded out by Brits Mick Fleetwood, 61, on drums and John McVie, 63, on bass - played material primarily from 1975's Fleetwood Mac, 1977's juggernaut Rumours (30 million copies sold worldwide and counting) and 1979's Tusk, embracing their most commercially successful years after Americans Nicks and Buckingham joined the group. (British keyboardist Christine McVie - and John's ex - gave up touring in 1989.) 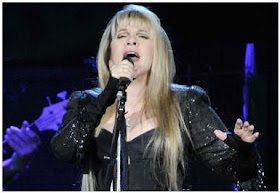 Notable deviations from that trio of albums were Gypsy from 1982's Mirage, Big Love from 1987's Tango In The Night, Oh Well from 1969's Then Play On, Buckingham's 1984 solo tune, Go Insane, and Nicks' 1983 solo song, Stand Back, all highlights in a set brimming with hits.

"Every time we reconvene it's different. As we got into rehearsals this time we just said, 'We're just going to have fun, and because there's no new album to promote - yet - we're going to do the things that we love and hopefully they are the things you love as well."

The fun quotient picked up considerably as the initially remote Nicks and Buckingham, a former couple who met as teenagers and split up shortly after joining Fleetwood Mac (Nicks would later have an affair with Fleetwood), actually started to sing while looking at each other and even embraced - it was more of a lean actually - during Sara.

Eventually, they held hands and were arm-in-arm, respectively, as they returned to the stage for their first and second encores.

Standouts proved to be Nicks' signature songs, Rhiannon, Sara, Goldust Woman (complete with her in a gold shawl) and Stand Back with a crowd-pleasing twirl; the fiery Second Hand News and Go Your Own Way, with Buckingham letting out one of his big whoops when the first song ended and Nicks decked out in a black top hat for the second; Buckingham's acoustic-guitar-driven Big Love and Never Going Back Again and then electrifying electric guitar work on I'm So Afraid; Landslide, which featured Nicks in a new burgundy dress and matching suede boots and Buckingham on acoustic guitar alone together on stage; and the old Peter Green blues-rocker Oh Well with Buckingham taking over lead vocals and a grinning Fleetwood having a grand old time behind his kit.

They also played the pretty and haunting Storms, from Tusk, which they have never performed on tour before.

"A stormy song for a stormy group of people," explained Nicks.

Less successful was Say You Love Me as Nicks and Buckingham traded verses on one of Christine McVie's signature tunes and her absence was definitely felt and Fleetwood's primal drum solo during World Turning.

The band were backed by two other musicians on keyboards and guitar and three vocalists but it was hard not to imagine how the lineup might have sounded given they briefly flirted with the idea of having Sheryl Crow join them on this tour.

There was also large curved video screens behind and above the stage that could have been put to better use with a montage of old footage or photos of the group given this was a Greatest Hits show.

Fleetwood Mac returns to the ACC on March 26.