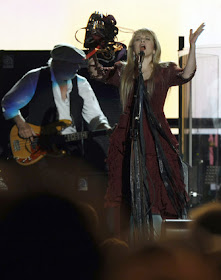 Tuesday night at the Verizon Center, Fleetwood Mac surveyed 40 years of its turbulent career, including material written by members past and present. But the concert was dominated by singer-guitarist Lindsay Buckingham, whether the quartet was excavating its origins as a late-'60s blues band or playing hits from "Rumours,'' its 30-million-selling 1977 zenith.

"Rumours'' connected to so many listeners because its raw emotions neatly contrasted the band's '70s update of California folk-rock, and because the group had three equally matched songwriters. One of them, Christine McVie, left the band in 1998, but the Mac could hardly play more than two hours without doing a couple of hers: "Say You Love Me'' arrived about two-thirds through the show, and onetime Clinton anthem "Don't Stop'' was among the encores.

Since there's "no new album... yet,'' as Buckingham announced to cheers, the group was free to mix longtime favorites with a few lesser-known numbers. Both Buckingham and singer Stevie Nicks performed tunes from their solo albums, although only the former got the stage to himself. But then Buckingham held the spotlight even when the full band (plus five backing musicians) was present. While much of his guitar work was folk-style finger-picking, he strutted as an electric-blues axe hero during "Oh, Well (Part 1)'' -- a song recorded years before Buckingham joined the group.

With Mick Fleetwood's drums heavily overamplified and as many as seven voices belting the choruses, the delicacy of the group's sound was sometimes at risk. But the melodies held up just fine, Buckingham led as deftly on stage as in the studio and Nicks showed she still knows how to really work a shawl.
Nickslive at Wednesday, March 11, 2009
Share