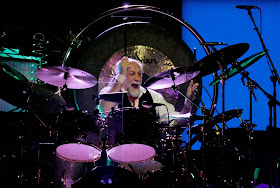 
Mick Fleetwood acts as if he has the best job in rock 'n' roll. Resplendent in breeches, stockings and bright red shoes, he commands the stage from his position on a riser surrounded by a gargantuan drum kit, complete with a shiny golden gong. The occasional close-ups of him on the JumboTron at the Verizon Center last night revealed a man gleefully possessed, whether tapping on a cowbell or unloading on the crash symbols. His drums are amplified beyond what is normally considered decent for a band that attracts, let us say, mature audiences.

Mr. Fleetwood's drive, energy and sheer joie de vivre are perhaps underrated as a force behind Fleetwood Mac's success. Another reason behind the band's success was there only in spirit - Christine McVie, singer, songwriter and ex-wife of founding bassist John McVie.

The band is crisscrossing the United States and Canada playing arena shows on its "Unleashed" tour. With no album to promote, the band mates are playing a selection of their most popular hits, a few of Miss McVie's compositions among them - including "The Chain," "Say That You Love Me," "World Turning" and "Don't Stop." For longtime fans steeped in the band's romantic intrigue, tempestuousness and shifting lineups, the current tour offers a familiar, passionate approach aimed at pleasing the vast majority of the audience.

Guitarist and singer Lindsey Buckingham alluded to this, introducing "Dreams" with a brief monologue on the "fairly complex and convoluted emotional history" of the band. By and large, though, Mr. Buckingham let his nimble fingers do the talking. His fiery, loose finger-picking style is a rarity among big-name electric guitarists. His frequent solos appeared to leave him spent, and he seemed authentically humbled by the applause that rained down after his efforts - especially after the lengthy, lightning-fast shredfest that concluded "Go Your Own Way."

Mr. Buckingham also does justice to the softer side of the Mac oeuvre, shifting adroitly between the frenzied, pulsating electric material and the acoustic miniset he performs with just Stevie Nicks at his side, including "Landslide" and "Never Going Back Again."

Miss Nicks was the wild card of the foursome. Her voice is best when it's rough and edgy, but at times her signature timbres seemed to give way to a flatter, more generic sound. On a few songs, her vocal lines were buoyed by the efforts of three backing vocalists. Her performance was uncertain at times as she leaned on her microphone as if for support. Perhaps, because it's early in the tour, she was pacing herself.

Still, by the time Miss Nicks had worked her way through two costume changes and the band had busted out the classic (and local favorite) "Silver Spring," she sounded a little more like the Stevie Nicks of yore. If Miss Nicks was feeling shaky, her audience was more than prepared to forgive her. She got her biggest cheer of the evening on "Landslide," with the lyric "But time makes you bolder/Children get older/I'm getting older too."

The 23-song set was more than businesslike but less than riveting. While the Verizon Center was filled nearly to the rafters, there wasn't an overpowering energy in the crowd. Even in the very front, just a few rows danced their way through the show. But my guess is that people who grew up on Fleetwood Mac will experience whatever transcendence their memories supply so long as the band keeps cranking out their old hits.

Lindsey Buckingham made like a Clinton with a free night in Washington on Monday: The famous front man of Fleetwood Mac dined at the Bombay Club, across Lafayette Park from the White House.

What about drummer Mick Fleetwood, who used to own a restaurant in Alexandria? Another source spotted him getting into a car in front of the Ritz-Carlton on Tuesday afternoon, in advance of the band’s show at Verizon Center. His attire: “Blingy” sunglasses.
Nickslive at Wednesday, March 11, 2009
Share