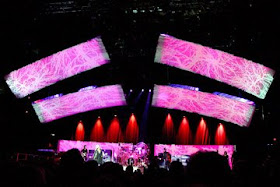 Seminal rock band and fan favorite Fleetwood Mac is touring North America with high flying Martin Professional LC Series™ LED panels incorporated as dynamically dominate set pieces.
Production Designer is Paul Guthrie of Toss Film & Design Inc. of Minneapolis who handled lighting, set, video and content for the tour. “I decided early on that I wanted a clean, simple look that complemented the band,” he says, “and I wanted to use technology in a way that enabled us to create modern versions of retro themes. We wound up using a lot of high tech equipment to try and make it look low tech.” 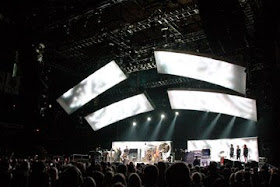 He commented on the decision to use the Martin LC panels in the design: “I spoke very early on to Brad Haynes at Martin US about incorporating EvenLED (LED panels) into six large scale curved light boxes that are the centerpiece to the design but ran into some logistical obstacles on our end that made us move in a different direction.
“On advice from our crew chief Ronald Beal at rehearsals, we realized the LC panels would fit into our set pieces and accomplish what we wanted to from the beginning, and from the second they powered up they looked fantastic.” 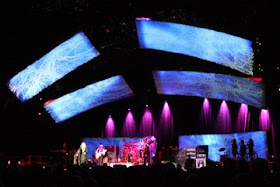 Guthrie has 42 of the 1 x 2 m LC Series LED panels installed to internally light the light boxes as well as run graphical content for effects. Visual content was created by Guthrie himself who also programmed the show.
Martin’s bright, modular, lightweight LED panels (40 mm pixel pitch) are often praised for their ease of set up. They use standard Prolyte CCS6 conical truss connectors, so linking the panels together is simple, and with no external power supplies or drivers, each unit comes with everything it needs built in.
Fleetwood Mac’s “Unleashed” tour launched in early March and is playing large arenas in the U.S. and Canada through the summer. The tour is being run by lighting director Axis DeBruyn and reports have the LC panels operating just fine.
Nickslive at Wednesday, April 22, 2009
Share