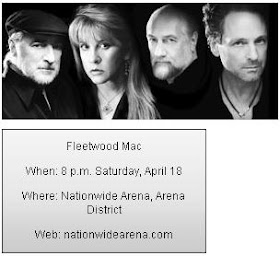 I think I speak for most of my generation when I say I'm familiar enough with Fleetwood Mac to know they rule, but not so much that I can adequately explain why. Throughout my 25 years, I've gleaned that Bill Clinton is a big fan, the members slept around with each other a lot and "Go Your Own Way" is a monster jam.
In the same way that Hall & Oates' soft-core soul has gained currency with America's youth, Fleetwood Mac has earned that vaguely kitschy, mostly genuine seal of approval. But I must admit I'm behind the curve.
With the band playing Nationwide Arena Saturday, now seems like a good time to learn more about the rock legends and pass along my discoveries to my fellow noobs. (This will also allow elitist Fleetwood Mac fans out there, if such people exist, a chance to look down their noses at me.)
FULL ARTICLE
Nickslive at Friday, April 17, 2009
Share