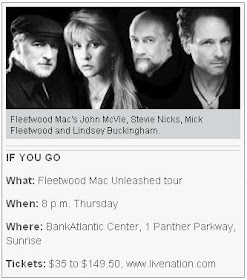 Fleetwood Mac, famed for its supremely catchy pop-rock songs (particularly in 1977's Rumours, one of the bestselling albums of all time) and tangled relationships, is hitting the road for the first time since 2003. The Fleetwood Mac Unleashed tour, which comes to the BankAtlantic Center in Sunrise on Thursday, will feature the group's greatest hits. Earlier this spring, singer and songwriter Stevie Nicks, drummer and founder Mick Fleetwood, songwriter and guitarist Lindsey Buckingham and (a mostly silent) founder and bassist John McVie talked about touring and getting together again.
Q:You've all been working on successful solo projects for the last couple of years, why come together to do the Unleashed tour now?
Nicks: Solo work and Fleetwood Mac is a really great thing to be able to go back and forth to. . . . We've been apart for four years, now we're back together and we're having a blast. It's terrific. Had we been working every single year for the last four years and we were going to do yet another tour this year, we would all be going ``Uh, OK.''
Q: You're coming out with the Rumours expanded re-release, and you're doing a Greatest Hits tour. Are you all thinking about a new Fleetwood Mac album?
Fleetwood: This is the first time that we've gone on the road without an album. We would enjoy doing another album, there have been discussions for sure that we would love to make some more music. I think it's really down to the whole bio-rhythms of how everyone is feeling and what's appropriate.
Q:After almost 30 years of music-making, how do you guys stay fresh?
Nicks: It stays fresh because we never stop playing. Basically what we are is entertainers. Even if this band had never made it big, we would still be playing all the clubs. . . . We're performers, that's what we do. So it isn't a question of keeping it fresh because it's what we love.
Q:It's been years since you guys went out together. How does that affect things?
Buckingham: It frees you up to enjoy each other more as people. The mantra is really more ''Let's just have a good time'' and value the friendships and the history that underpins this experience. The dynamic between band members, you wouldn't think after all this time, but it is still to some degree a work in progress.
Q:Are you influenced by current and recent music?
Buckingham: The older you get the more you find your own style and become more self-referential. I think that is the difference between being in your 20s and having a circle of people who are all out there listening to every new thing that comes out and are also networking in terms of sharing it. That tends to fall away over time. . . . as you grow into a style that you can call your own it becomes less and less important to try to emulate new things that come out.
It's always enlightening and reassuring to me to hear an artist who is doing something on their own terms because I think that's the only way you survive over the long term. When someone like Radiohead can get up at an otherwise fairly musically void awards show [the 2009 Grammys], a group like that means a lot to me.
Q:The title Unleashed sounds like professional wrestling or a heavy metal band. Who is leashing you and why are you unleashed now?
Nicks:Unleashed to me meant unleashing the furies, unleashing us back into the universe. Unleashed to me was an edgy term of throwing this amazing musical entity back into the world that we had been away from for four years.
Q:You and Lindsey have occasionally had difficulties to work out. Has that been part of the preparation for this tour, or has it been easier for you?
Nicks: Lindsey has been in incredibly good humor since we started rehearsal on the fifth of January. And when he's happy, everybody is happy.
Buckingham: We are a group of great contradictions, a group that in some strange way you could probably say doesn't really have any business being in a band together. . . . But that's what makes Fleetwood Mac what it is. It's the whole being greater than the sum of the parts. It's the energy created from that contrast in personalities.
Q:What do you get out of working as part of a group as opposed to being a solo artist?
Nicks: In the beginning, I really had no interest in being a solo artist. Because what I love is being in a band. But after you've been in your solo work and done what have I done, 11 solo albums, where I am absolutely the boss, you get used to being the boss. So it's good for everybody to be knocked down a little bit. It makes you think more.
Fleetwood: I'm the boss now.
Nicks: You're all fired.
Nickslive at Friday, April 17, 2009
Share