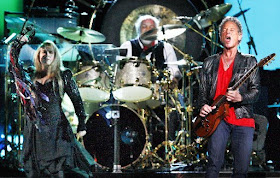 You could call Fleetwood Mac's current tour an oldies show. It is, after all, titled "Unleashed: Hits Tour 2009," which means the 23-song set consists solely of classic radio staples and album tracks. There is no new CD to promote. In fact, the band hasn't recorded one since 2003's Say You Will. But that tag completely sells this concert short. Fleetwood Mac, which packed the American Airlines Center Thursday night, remains highly influential. Talk to any of today's popular country acts (especially the ones with a pop-rock musical bent) and the Mac is mentioned. Stevie Nicks, FM's longtime temptress, has left her stamp on so many female vocalists of the last 20 years -- pop, rock, country and otherwise. And anyway, Thursday night's show was fiery. Even during songs that didn't quite gel -- such as Lindsey Buckingham's manic, robotic "Tusk," there was something to admire. In that case it was Mick Fleetwood's ferocious marching beat drumming. But the highlights were many, particularly Buckingham's amazing rendition of "Big Love," which was just him at the mike while he finger-picked an acoustic guitar. The wall of sound was astonishing. Nicks' "Sara," "Gypsy" and "Dreams" brought back such evocative memories.

For a full review of the Fleetwood Mac concert, go to www.guidelive.com Friday and check Guide Daily on Saturday.

Photo: Nicks, Fleetwood and Buckingham at the AAC (John F. Rhodes/DMN).
Nickslive at Friday, May 01, 2009
Share