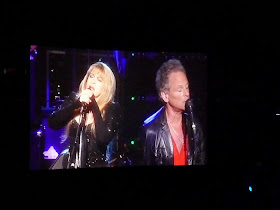 "We have a complex, convoluted history," said Buckingham, who paused before launching into a brief stemwinder about Fleetwood Mac's enduring power, how "every time we get together, there's a sense of history and forward motion."

Surely, the irony of "forward motion" being mentioned in a room where nothing but the classics were being aired out wasn't lost on Buckingham. The evening was, start to finish, the very definition of retrospective. Nevertheless, the crowd -- not quite at capacity, but from all appearances, pretty close -- roared, Buckingham smiled and four-fifths of the vintage Mac line-up (keyboardist Christine McVie said adios in 1998) launched into I Know I'm Not Wrong, from 1979's bristling opus Tusk.

For more than two hours Thursday, Fleetwood Mac was "unleashed" (its term), free to roam its extensive back catalog and cherry-pick a few favorites to showcase alongside lesser-known cuts like Wrong or Storms, also culled from Tusk.

The curse of a greatest-hits tour (Fleetwood Mac has no new product to promote; its last album of fresh material was 2003's Say You Will) is that it provides little artistic wiggle room -- dramatically overhaul the crowd pleasing cuts and you alienate those who plopped down big bucks to see the show. Hold back too much and you're simply going through the motions.

Fleetwood Mac, plumped up with a trio of back-up singers, a keyboardist and an extra guitarist, erred on the side of restraint, although the ever-volatile Buckingham couldn't contain himself, ripping out a pair of absolutely astonishing solos; the string-searing finale for I'm So Afraid is probably still echoing inside the American Airlines Center. Mick Fleetwood's timekeeping teetered between bombastic and delicate, while vocalist Stevie Nicks, ever the ethereal mistress, twirled about the stage, her shawls and ribbons aflutter.

But time has defused much of the combo's combustible energy; Nicks and Buckingham walked onstage arm-in-arm and the fleeting moments where the pair generated any palpable sparks were frustratingly few. Indeed, Buckingham's nimble riffs often felt like the only glimmer of life; the honey and vinegar interplay of Nicks' and Buckingham's voices still sizzles, but even that wasn't enough to boost the tunes over the considerable expectations of nostalgia.

No, the passage of years was plainly evident as Buckingham offered a mawkish tribute to his wife and children (whom he said were in attendance) before launching into Tango in the Night's acidic Big Love, which left Nicks, during Landslide, to intone "I'm getting older, too," investing the line with an ache and, most importantly, a wisdom not necessarily apparent in 1975.