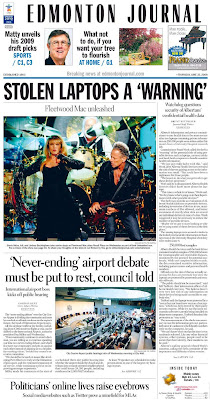 EDMONTON — So, was it worth the wait, you ask?
BY TOM MURRAY, EDMONTON JOURNAL

Where: Rexall Place
When: Wednesday night

With multiple stories running in all media about fans distraught at last month’s postponement of Fleetwood Mac’s Edmonton date, you just knew that anticipation would be running high when they finally rescheduled — and that the band would be fully aware they had to deliver.

Well, deliver they did, with a stomping two hours plus set of hits that eschewed almost all recent material and honed in on the hits.

Guitarist Lindsey Buckingham in particular was on fire from opener Monday Morning on, playing as though his life depended on it, sizzling leads igniting The Chain and Second Hand News, vocals coming straight from the heart. His ex-girlfriend and constant foil Stevie Nicks was a step behind, a strong singer but unable to hit the notes she once did on Rhiannon and Sara, or sharing missing member Christine McVie’s Say You Love Me with Buckingham.

Even with these slight reservations it was still an at times powerful experience — made so in part by one of the greatest and oft overlooked rhythm sections in rock history, John McVie and Mick Fleetwood — with songs that could’ve been glossed over after over thirty years of constant radio and live play. It was especially impressive considering the fact that all of the interior drama that made Rumours and Tusk such fantastic albums has now dissipated over the years as the various members have reconciled with each other. And although Buckingham made a special point of noting those tensions, you could still feel those old emotions rise up on songs like Second Hand News — or maybe it was simply the combined memories of 12,000 fans as up to date on the band’s romantic entanglements as they are. 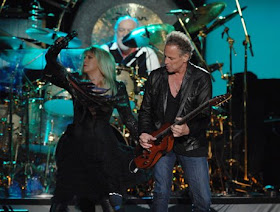 A strange, strange situation to be in — personal hurts played out for entertainment — but then that’s where the band has always excelled.

And it has to be said that while they have little competition when it comes to muscular California pop, Nicks and Buckingham also slay when the acoustic numbers come out. Buckingham started it off alone with an impassive, almost vengeful Big Love that fully deserved the near unanimous standing ovation it got, with Nicks joining him for Landslide — good, but almost a letdown in comparison. 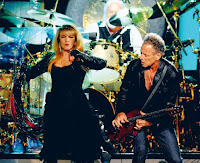 Buckingham’s intense performance reminded that while he was lumped in with the California folk pop movement of the ‘70s he always considered himself in some ways allied with the British punks — and that Tusk, their experimental to Rumours, was meant to take the band out of formula. It never did, but a few cuts have survived into the stage show — a long version of the hit Sara, and a reserved take on Storms.

To see a group as involved in their back catalogue as Fleetwood Mac is a heartening thing — especially with so many other bands simply playing by rote. They may not be breaking new ground as they once tried, but Buckingham did acknowledge with a wink that there is something in the works — fingers crossed that playing these old classics will give us a new Rumours and not, say, Mirage.
Nickslive at Thursday, June 25, 2009
Share