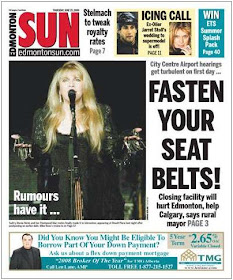 A study in contrasts
By MIKE ROSS, Edmonton Sun

It was more like one last hurrah. It was drummer Mick Fleetwood's 66th birthday last night. Perhaps that explains it.

Actually, Stevie Nicks has always seemed a bit sleepy on stage, but that's just her style, you know?

While she omitted a few high notes during the show at Rexall Place last night, her sultry, sleazy, captivating voice was largely intact.

There's no one quite like this singer. She often plays with her notes in the manner of a bored cat toying with a doomed mouse, which might be an unpleasant image to associate with such a beautiful voice, but at heart I think Stevie Nicks is a cat person. She'd understand.

Anyway, her ex Lindsay Buckingham provided most of the fireworks during the extra-long hit parade (rescheduled from a date cancelled in May).

He comes off a bit too much in love with himself, but he's such an awesome guitarist that he's entitled, don't you think?

The grey ponytailed rhythm section of Mick Fleetwood and John McVie, meanwhile, provided an oblivious rock solid accompaniment to this rock 'n' roll study in contrasts: the laid-back Stevie vs. the fiery Lindsay, the witchy woman vs. the howling wolf, pick your metaphor.

How these two ended up together is a mystery, but they did, the tension of their relationship and ensuing break-up supposedly providing some kind of magical, creative juice that resulted in one of the finest rock records ever made, Rumours.

Would it have been the same if they hadn't split? We'll never know. Fans should be pretty sure, however, that without this colourful couple, Fleetwood Mac would've probably been just another garden variety British blues band.

The pair of frontpeople made hash of their stormy past onstage -- for our amusement, surely. 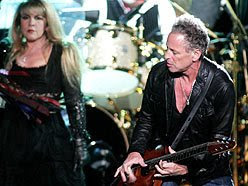 In one of his bits of canned patter, Buckingham laughingly referred to the band's "complex and convoluted emotional history." He would expand on the theme later.

You can try to read body language into it. While Nicks gave Buckingham a hug at one point -- was this, too, rehearsed? -- the two largely kept to their respective sides of the stage, and their respective musical domains, too.

At times, she also twirled like a tasselled ballerina and played air guitar during his solos. Lindsay made a lot of guitar face, sometimes howling "oh yeah!" at the end of a particularly great solo.

Like I said, it was a study in contrasts, two concerts in one, really. Buckingham got the up-tempo, high energy stuff and the blistering solos -- especially shining in songs like I Know I'm Not Wrong, Go Insane and the distinctive Big Love.

Stevie took the mellow side of the road, haunting hits like Gypsy and Rhiannon (no relation to Chris Brown's girlfriend). She was especially "sleepy" -- let's just say hypnotic -- in one of her signature songs, Landslide.

Overall, it was a two-hour-plus hit parade that was promised to contain no new music, only "songs that we love to play and I'm sure you want to hear!" Buckingham declared. (Bachman Cummings take note.)

They played a bit with the arrangements, but not so much that you'd have to play "guess that tune" after the song kicked in.

The tribal groove of Tusk had the crowd cheering with joy. The canned horns filled the arena.

There are always things to nitpick about a bunch of 60-ish millionaires touring on their laurels -- they're doing it more for money than fun, let's get real here -- but this is Fleetwood Mac.

By the two-hour mark, Buckingham was still uncorking one wild solo after another, Nicks was still in good voice -- and several different outfits -- and Mick was still banging out the beat (and that damn gong) like a champ.

You couldn't ask for more. Well, you could, but let's not get greedy.

One last hurrah for the last date of the tour -- and happy birthday to Mick Fleetwood.