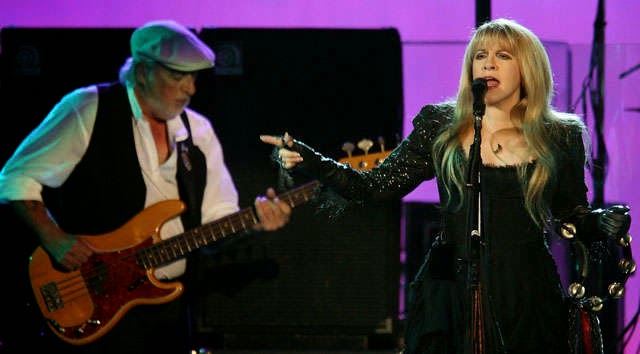 What else can you call it when an announcement from Lindsey Buckingham that his legendary band Fleetwood Mac will not be playing any new songs during the group’s Tuesday night concert at the ‘Dome draws hearty cheers throughout a crowd of 11,000 fans?

As the 59-year-old singer/guitarist told the audience early, this "Unleashed Tour" of the Mac’s is all about "having fun" with none of the pressures of selling their fans on new material. This tour is about the hits.


Which is all that classic rock fans really seem to want, for the most part — to the chagrin of many a classic rock artist, some of whom still have something to offer artistically. Based on some of their more recent work, I’d say Fleetwood Mac fits into that category. But like the Stones, The Who, Elton, you name it, few seem to care when they work the new stuff. That’s drink time, bathroom time, talk amongst yourselves time — no matter the quality of the fresh tunes. 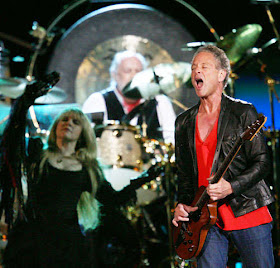 It has to be frustrating for the artists.

To their credit though, Fleetwood Mac sidestepped the issue gracefully in Calgary, playing a set finely jammed with crowd faves.

They kicked off the show with Monday Morning, which immediately showcased the band’s great strength — that sunny California folk-pop filtered through the English blues-rock base of drummer Mick Fleetwood and bassist John McVie.

This was followed up by a fantastic version of The Chain, which still stands as one of the Mac’s great masterpieces, Fleetwood, 62, every bit the mad pirate drummer on that one, hammering his giant gong.

One of the criticisms Fleetwood Mac often draws these days is the charge that singer and resident diva Stevie Nicks, 61, can’t deliver like she used to. It’s a valid point and that was evident enough at times, as in the rather limp version of Dreams, one of her signature tunes. Actually, it sounded as if both Nicks and Buckingham were being carried by their backup singers at certain points in the concert.

But Nicks also proved that her sultry rasp still has some life in it, most notably on beautiful versions of the acoustic ballad Landslide and her pseudo-mystical hit Gold Dust Woman.

As far as impassioned deliveries went, however, Buckingham stole the show.

On his acoustic showpiece Big Love there was no doubt as to what a fiery and incredibly underrated guitarist the man is and his vocal performance was so fevered, almost maniacally so, that you’d have thought the guy was about to explode. 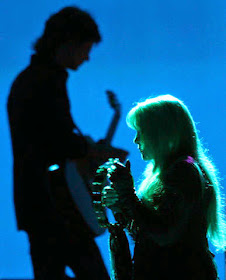 Even though the Mac limited themselves to the all-classics format on this tour, it was also commendable the way the band found ways of maintaining a vibrant and fresh approach.

Dusting off hidden gems like Storms off Tusk was one means of achieving that. So too was the band’s storming version of the heavy rocker Oh Well, which goes back to Fleetwood Mac’s pre-Lindsey and Stevie days in the ‘60s when the band’s star was blues guitarist Peter Green. On this tune Buckingham again shined, his chops on the six-string absolutely fierce.

In the end, Fleetwood Mac’s Tuesday show at the ‘Dome was one with far more highs than lows, even if the sweet harmonies of departed member Christine McVie were missed throughout the evening, and certainly when the band encored with one of her tunes, Don’t Stop.

By that point though, the only thing that wasn’t stopping was the adulation, and that’s something Fleetwood Mac had earned on this night.
Nickslive at Wednesday, June 24, 2009
Share