The Bottom Line Far more than a mere nostalgia act. The Mac Attack still has legs! Check 'em out! 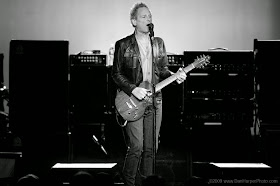 Controversy has always been part of the Fleetwood Mac legacy. In the past, sparks have flown over divorces, affairs, infighting and band break ups. Though the band’s personal escapades have mellowed with time, the current tour has not been completely devoid of storm clouds. Most recently, the band postponed 3 concerts in Calgary, Edmonton and Sacramento during the May leg of their Unleashed: Hits Tour 2009 due to undisclosed health concerns. Having driven out to Calgary specifically to see their show, only to have the show postponed at the last minute – I awaited their Winnipeg appearance with some apprehension.

But June 6 rolled around, and no cancellation was announced. At 7:45pm, I was in my seat listening to the lulling sound of crickets (in lieu of music) that emanated from the PA. The cricket sounds were relaxing, but given that there was no warm up act, and the band hit the stage a half hour late, the crickets soon became a little grating.

At 8:30pm, the lights went out; the crowd roared and the legendary Rumours line up of the group: Mick Fleetwood, John McVie, Lindsey Buckingham and Stevie Nicks (sadly without Christine McVie who stopped touring in ’98) took the stage. Though McVie and Fleetwood looked a little long in tooth, Stevie and Lindsey still looked great.

Lindsay kicked off the night with his self-penned song Monday Morning off of Fleetwood Mac’s self-titled album. His exuberance was infectious and earned the band an immediate standing ovation. The fans on the floor remained standing for the duration of the show. They kept up the momentum with the instantly recognizable track The Chain culled from their multi-platinum 1977 album Rumours, giving Buckingham a chance to show off both his vocals and lead guitar playing talents.