Dust off your black chiffon

Stevie Nicks is back 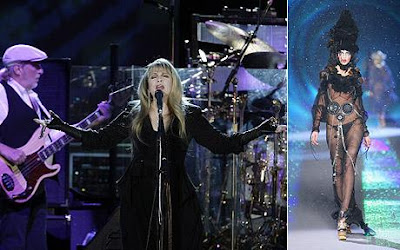 The news of Fleetwood Mac’s most recent comeback will have sent Stevie Nicks fans scurrying to wipe the dust off their ‘Rumours’ LP and to scour attics and garages for a trace of still-wearable black chiffon.

Nicks was the ultimate flower-child/rock-fairy. She wafted like some Gothic ‘witch-ling’, wreathed in wisps of black chiffon; all handkerchief hems ,‘angel wings’, Victoriana, smokey eyes and tousled blonde hair. Her fey, ‘bad fairy’ image was matched by a drugs habit, and a love life that would send Relate into a frenzy . But this has only enhanced her appeal as one of rock ‘n’ roll’s more enduring style icons.

Fleetwood Mac’s latest return, for the first time in six years, coincides with this season’s fresh take on black. From punk to goth, from studded leather to diaphanous chiffon, all the rock chick’s favourite bits of gear are available at every price level from designer to high street.

Designers such as John Galliano, and Riccardo Tisci, at Givenchy, both included sheer, black chiffon in their autumn/winter collections, variously draped with medieval silver belts or netting. Other brands, such as Future Classics, Stella McCartney and Erin Fetherstone, have worked the theme as a glam-goth vibe, in lace, tulle and silk, while the new, young designer Qasimi has created a spooky-chic version of Cruella de Vil, in black satin and beaded net. Kate Moss - a Stevie Nicks’ lookalike, in many respects - has included several rock-fairy pieces in her latest collection for Topshop, including a triangle-studded, black chiffon kaftan, and a forest-green, ‘butterfly’ dress, with asymmetric hem and flared sleeves.

Miss Selfridge, River Island, Wallis and Dorothy Perkins, as well as asos.com, are also great hunting grounds for the Stevie Nicks’ look. at prices which compare favourably with the first time the singer first registered as a blip on fashion’s radar nearly four decades ago.