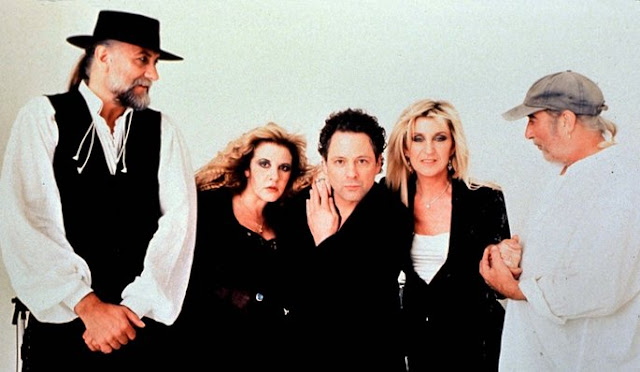 
1977: death of Elvis, the apogee of punks. And release of the album "Rumors" by Fleetwood Mac. Within the group, John McVie, founding bassist, was in the process of divorce from Christine McVie, one of the blonde singers. Stevie Nicks, the other blonde's big Mac, separated by guitarist Lindsey Buckingham. And Mick Fleetwood, drummer, could not stand his wife, Jenny Boyd. So he had an affair with the beautiful Stevie, who slept with Eagles. Christine, she flirts with a Beach Boy alcoholic ... A game of musical fuck where everyone railed at himself for breakfast, especially since they ingesting massive quantities of alcohol and cocaine. Small SexPistols could sew their t-shirts, it was their most excessive.

From this chaos is released sentimental "Rumors", the perfect pop Californian, crammed with tubes on these disappointments: "Go Your Own Way" "Dreams," "Do not Stop" which has sold nearly 40 million 'copies. It's a funny group Fleetwood Mac. For they are English by birth and origin of blues, from the stable of John Mayall, who was discovered Clapton and the Stones. From 1967 to 1975, training has varied according to the delusions of each. The original guitarist, Peter Green, an acid eats through it hand in 1970. Another joins a cult, the Children of God. Still another, Bob Welch, drops Mac in 1974. Then landed a couple of Californians fan of The Mamas and the Papas: Stevie Nicks and Lindsey Buckingham. These two have changed the music of the band.

No more blues british, Mac begins to produce an FM rock public, near the Eagles, ideal for spending time on the highway. They sound so American that Bill Clinton chose in 1992 the song "Do not Stop ..." to enter the stage of its meetings. It was he who had convinced Fleetwood to reunite at a party in the White House. They are all well slashed in the 80s. In their defense, it seems difficult for ex-lovers stoned to climb on stage every night, recording discs (including the brilliant "Tusk"). They could not survive the withdrawal of Lindsey in 1987, which dealt so of Stevie Nicks' schizophrenic bitch ". At each withdrawal, the holders of the name, Mick Fleetwood and John McVie, finding substitutes more or less inspired.

For ten years all have rabibochés. Clean and sixties, members of the Rock and Roll Hall of Fame, the Fleetwood Mac had filled stadiums in 2003 during a world tour accompanied by an album not bad, "Say You Will," vowing that money motivated them no more than that. This year, turned again, without hard to promote. Good. The public will not suffer a new group which he wants to hear that wonderful junk. Director: Mick Fleetwood, John McVie, Stevie Nicks and Lindsey Buckingham. Lack Christine McVie, tired of rock and roll. A rumor Sheryl Crow announced in his place. Denied. In the old buddies we made the best soups.

In concert October 17 in Paris (Zenith).