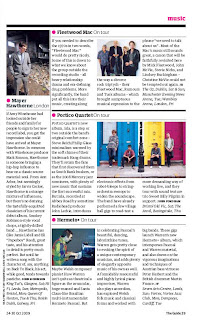 Fleetwood Mac, On tour
The Guardian - Guide:  If you needed to describe the 1970s in two words, "Fleetwood Mac" would do pretty nicely. Some of this is down to what we know about the group outside the recording studio – all heavy relationship drama and era-defining drug problems. More significantly, the band put all this into their music, creating along the way a divorce rock triptych – their Fleetwood Mac, Rumours and Tusk albums – which brought sumptuous musical expression to the phrase "we need to talk about us". Most of the Mac's music still sounds great, a canon that will be faithfully revisited here by Mick Fleetwood, John McVie, Stevie Nicks, and Lindsey Buckingham – Christine McVie could not be tempted out again.