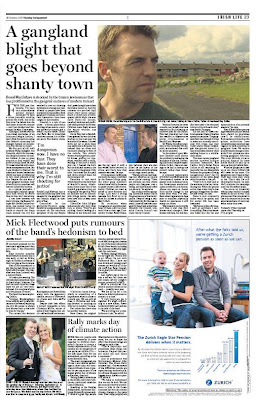 If one band summed up the hedonistic eighties more than any other, it was Fleetwood Mac.

Now founder member Mick Fleetwood admits that it was early to bed on Friday night in Dublin in advance of their two gigs at the 02 Arena.

He's a little shamefaced to say that he had dinner at his hotel with his sister, who travelled over from Cornwall with a mutual friend.

"A lovely quiet evening. The old hedonism sometimes rears its head when I discover I've had too much wine but these days we are all very well- behaved. It's one glass of wine and five glasses of water."

The band has been exploring Dublin.

"Lindsey (Buckingham) loves walking and loves architecture so he was off exploring the city. He seems to always find his way back to the hotel in time for the gig."

The current tour features Buckingham and Stevie Nicks along with the legendary rhythm section of Fleetwood on drums and John McVie on bass.

Despite their best efforts it proved impossible to lure Christine McVie, writer of some of their biggest hits, out of a self-enforced retirement.

"Christine hates flying, which is something of a impediment when it comes to a world tour. We are still all close to Christine and looking forward to catching up with her in London," he says.

But before that there may be another reunion.

Peter Green, the original creative genius behind Fleetwood Mac during their heydey as one of the most influential British blues bands, is playing the Academy on Monday night with his own band.

"Is Peter playing? Brilliant, it's my night off. I would love to go. When I'm not with Fleetwood Mac I have my own little band playing small venues and we play all of the old stuff that Peter created. I'm so glad you told me that," he added.

Last night's gig at the 02 was a sell-out but there are still tickets left for tonight's concert promoted by MCD.

Mick is convinced that there is another album in the band -- possibly next year.


"We are all up for it but Stevie is a little bit reluctant to commit to a time."

"I truly hope we get it together. It's tough committing to a new album. Stevie works incredibly hard and she is the lady of the band.

"We are trying not to really discuss it yet," he added.