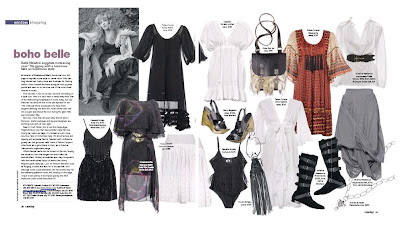 In honour of Fleetwood Mac’s December tour, this page is inspired by the style of Stevie Nicks. With her long blonde hair, husky voice and fondness for flowing chiffon, Nicks fronted the band during its most popular period and went on to become one of the most loved women in music.

She has also, it has to be said, become something of a style icon. Hers is a look that’s a world away from that of the flesh-baring nymphettes in music today, but one that saw her become one of the sex symbols of the ‘70s. Although there are people who have never stopped dressing like their idol, most others ( who are old enough) abandoned the look during the glam ‘80s and minimalist ‘90s.

But now, more than 30 years after the hit album Rumours, chichi boutiques and top-end designers are stocking such garb all over again.

Bear in mind, Nicks’ look is not that hippy-dippy Haight-Ashbury one that Sienna Miller made famous during her Jude Law days. It is instead a much more luxurious take on bohemian style. It’s about texture and layering and exquisite fabrics, teamed with confidence, glossy hair and groomed nails. Parts of Trelise Cooper’s collections are a good place to start, as is Vivienne Westwood’s Anglomania range.

While cheaper items can be thrown in the mix, buying the whole lot from the bargain bin won’t have the desired effect. Quality accessories are a key component, with the hand-crafted luxury of brands like Henry Beguelin particularly apt. Look for textural elements such as fringing, crochet and faux fur to incorporate. And although some crucial elements, like her plumed top hat and teetering platform boots, are missing on this page, I hope to see plenty of examples gracing the New Plymouth crowd come December 19.