My first exposure to Fleetwood Mac was in the 6th Form Centre at St Philip's GS. A schoolmate was gamely plucking away at Albatross, the bluesy, dreamy instrumental that charted for the band in 1969. 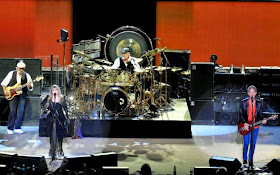 Last night (Saturday) at the O2 in Dublin two of the original members of that band, Mick Fleetwood and John McVie were still laying down the rhythm for the band forty years later. It's gobsmacking isn't it?

Not so for some of those in the audience, each of whom had paid upwards of €80 to see these legends, arguably the greatest band still on the road. Quite probably never to tour again. A steady stream of punters only intent on travelling to and from the bars for a steady supply of fizzy shite lager. Like it was being discontinued tomorrow. And resulting in further disruption as this resulted in the drinkers having to regularly leave their seats for a piss. Turning their backs on some of the most sublime music ever made. Truly it is very sad, the need to have an alchoholic drink before it is considered that one has a night out. Now, I'm no stranger to alchohol but last night made me ashamed.

But that spoilt my evening only slightly. The gig will remain memorable for howevermuch time I have left. The O2 Arena is a magnificent venue and the atmosphere was electric - the audience comprising younger ones who were only stars in the sky in 1969 as well as us greybeards.

They could have performed anything and we would have been pleased. Guitarist Lindsey Buckingham said that, with no album to promote, they had decided just to have fun on this tour and play what the audience wanted. Early on they sung The Chain, long adopted by the BBC for their Formula 1 coverage and happily reinstated now that they have bought back the rights from ITV.

The first of many from the mega-selling Rumours album. Was it just me or did Buckingham appear to falter and compose himself briefly as he spoke about the personal turmoil that the band members were going through at the time and which resulted in such a creative body of work? Go Insane was the first opportunity for Buckingham to really get into the gig and he took it.

Lindsey Buckingham is the focal point of the band. The solid rhythm section of Mick Fleetwood and John McVie has been the cornerstone of the band for over forty years. But Buckingham is the elemental force and the band would be nowhere without him. His vocals are raw, his guitar work falls short of virtuoso, but by God does he give it his every ounce of energy. And tonight he carried the audience with him and it was fantastic.

Next up was Rhiannon, one from way back and the unutterably lovely Stevie Nicks started to come into her own. Along with Elkie Brooks and Carol Decker, Nicks has long given me the shivers with her voice. Quite incredibly she is now 61 and she still takes the breath away. She has never had a powerful voice (unlike Brooks and Decker) and her contralto now lacks the edge of old. But she is wonderful and no one was going to nitpick on a night such as this.

Nicks performed Sara beautifully, before Buckingham launched into Big Love. Mercifully there was no attempt to replicate the male/female grunting and gasping fadeaway of the original recording - it was all one-sided!

Never Going Back Again, Storms and Say You Love Me followed. Then Nicks picked up Gold Dust Woman from the Rumours album and gave it the full treatment, with a lovely, drawn out ending led by Mick with Nicks bathed in a golden glow from the lights. And immediately followed on by Oh Well - back to the Green/Kirwan days and a faithful rendition by Buckingham.

Now, the Mac are not a band that necessarily have the audience on their feet. They produce well-crafted work and don't go in for rabble-rousing. But as they closed their set everyone was up singing, dancing and rocking along to Go Your Own Way.


And then a surprise. For an encore, rather than belt out another favourite as the audience expected, Mick Fleetwood suddenly took the limelight. The drum solo is a lost art but during World Turning Mick involved us, the rabble, and had us on our feet again. Then a sign-off with another singalong Don't Stop.

At which point the O2 audience, totally wrecked, headed for the exits. But amazingly there was a second encore as the set approached three hours in length and Silver Springs was played to a half-empty auditorium.

Truly the formers lovers and clearly still soulmates Buckingham and Nicks, and the rocks that are Fleetwood and McVie, comprise one of the best blues/rock bands of all time. Their Dublin gig will never be forgotten and the Mac put in a huge effort as if they suspected that they are on borrowed time. We, the audience, had much more than our money's worth. Just a nagging regret that Christine McVie wasn't around with her old mates.