(REVIEW) FLEETWOOD MAC GLASGOW "They Keep Going Their Own Way" 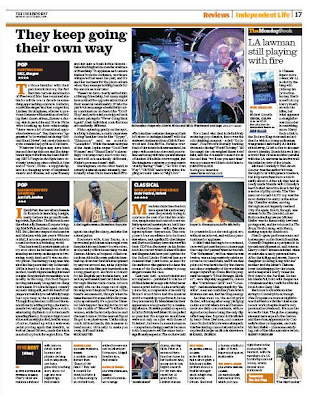 To those familiar with their patchwork history, the fact that this current incarnation of Fleetwood Mac has remained stable for a little over a decade is something approaching a miracle.

Guitarist, sometime singer and key songwriter, Lindsey Buckingham, alludes to previous traumas with mention of recording their classic album, Rumours, during which period he and Stevie Nicks were breaking up their relationship: "there were a lot of emotional opposites between us". Yes, there was "aggression" to be worked out during "Second Hand News", but rarely has such spite sounded as joyful as it did here.

Whatever bridges may have been burned during this era and Buckingham's departure from the band following 1987's Tango in the Night have obviously been long since rebuilt. At the end of "Sara", Nicks – a hippyish figure in a changing array of sequinned shawls and dresses, her eyes dreamy and her hair a fresh bottle-blonde – takes Buckingham in a tender embrace of friendship. To applause and camera flashes from the audience, words are whispered between the pair, and it's another moment for the photo album when they emerge holding hands for the encore an hour later.

These two have clearly settled into a lifelong friendship, but many might have noticed the opposite attraction of their musical relationship. While the pair's voices manage a beautifully rootsy combination on duets like "Don't Stop" and particularly a stripped-back acoustic pairing for "Never Going Back Again", their individual contributions are markedly different.

Nicks, spinning gently on the spot, is a folky bohemian, a rustic chanteuse during familiar tracks like "Gypsy", "Rhiannon" and an acoustic "Landslide". While the musical styles of the Janis Joplin-esque "Gold Dust Woman" and "Stand Back"'s alarmingly contemporary electronic keyboard riff are markedly different, Nicks's persona doesn't shift.

Buckingham, on the other hand, is a study in almost manic intensity, particularly when Nicks has walked off to effect another costume change and he's left alone to indulge himself with the stalwart rhythm section of Mick Fleetwood and John McVie. Perhaps over-fond of the extended instrumental, he plays with a serious stare and punctuates each song with whoops and stamps of the feet. It's a little overwrought, but Buckingham conjures a young man's vitality during "Tusk", "Go Your Own Way", "Oh Well" and a truly spine-tingling acoustic take on "Big Love".

For a band who deal in definitively enduring pop classics, there was the odd clunking moment – a dull "Go Insane", Fleetwood's literally barking drum solo during "World Turning". Yet the magic far outweighed these brief lulls, and the drummer's assertion at the end that "we'll see you next time" was a promise we'd like to hold him to.
Nickslive at Sunday, October 25, 2009
Share