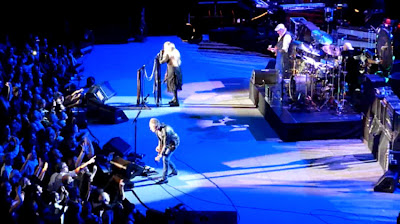 The first signs were good. I've been to a lot of shows by “heritage bands” in my time, but I don't think I've ever seen a crowd for a band of Fleetwood Mac's vintage that had such an even age distribution. Sure, it was heavily weighted towards the greying end of the scale, but every age group down to teens – including teens there in groups under their own steam, not just with parents – was well represented, right across class boundaries too.

But then Fleetwood Mac have always been a lot of things to a lot of people. From the bluesy 60s underground Peter Green era, through the spectacular 70s pinnacles of rock-Babylon mega-success following Green's decline and departure and the arrival of sparkly-eyed Californians Stevie Nicks and Lindsey Buckingham, to the shiny pure pop of their late-80s Tango In The Night creative swansong, they covered an awful lot of ground. Everyone was hoping their setlist might suit their own tastes – in my case the Tango In The Night songs of my schooldays. Sadly they did not play this.

On stage, the band managed the extraordinarily impressive feat for such a repeatedly split-and-reformed act of actually looking like a band. Other than the lack of Christine McVie, who has seemingly permanently retired from live performance, this was the classic 70s/80s lineup of Nicks and Buckingham out front and the founder-members' British rhythm section of Mick Fleetwood and John McVie (the original “Fleetwood” and “Mac”) on drums and bass behind them – plus backing vocalists and two session musician multi-instrumentalists in the wings.

Fleetwood and McVie looked rather like a multimillionaire Chas & Dave with their matching flat caps, waistcoats and beards, while Buckingham had the air of an over-dressed pervy music teacher and Nicks of a wonderfully batty goth aunt, complete with one black glove, tinsel hanging from her sleeves and a mic stand draped with witchy decorations. But somehow, among the arena lightshow and moving set decorations, despite all the history, they still looked like their relationship was musical.

And it is. From the swagger of “The Chain” (from the quintillion-selling Rumours) onward it was clear this is more than just some ageing drug casualties propped up by technology and extra staff. The 12-string guitar jangle of Tusk's “I Know I'm Not Wrong” showed how much Fleetwood Mac's work prefigured the whole of eighties alternative rock as well as the mainstream – making them the missing link between The Byrds and The Cult. “Second Hand News” was a mighty country-rock stomp, showing precisely how much the band were always connected to heartland America. And “Rhiannon” and “Sara” showed how much Nicks's voice was born to age gracefully, it's catches and cracks only made more affecting by age's emphasis.