Millions watched the BBC in the UK when Fleetwood Mac's new documentary "Don't Stop" first aired last week.  If you missed the show on TV the first time round - this Friday and Saturday the show is being rebroadcast on BBC Four... It's a really well done doc with all new interviews from the current band members and includes loads of old footage.  The documentary focusing mainly on the Rumours era members but also pays respect to members leading up to the Rumours era.... On Friday it's back to back documentaries with Rock Family Trees following - which is also really good... 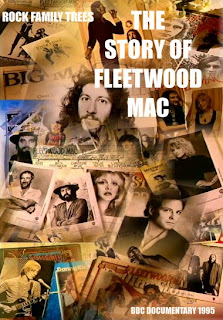 this Friday and Saturday

One of the biggest selling bands of all time are back on the road. This is their story, told in their own words.

The career of Fleetwood Mac, famous for their complicated inter-band relationships as well as their music.

The story of the blues performer who found fame in the 1960s as the lead guitarist of Fleetwood Mac, but left the public stage for years as he battled drug addiction and mental illness. Featuring archive footage and interviews with Noel Gallagher, Carlos Santana, his former bandmates and the musician himself.