The debate surrounding whether the legendary big bands from yesteryear should continually reunite, rehearse and play shows - a few extra wrinkles visible with each comeback jaunt - rages on. Everyone has an opinion on damaged legacies, damaged voices and whatever else, but one overriding fact remains: people still want to hear the songs, buy the tickets and fill the arenas. And, let’s be honest, there are some bands for whom many would do unspeakable things to see back on stage (Led Zeppelin, anyone?)

Fleetwood Mac, finally back at Wembley Arena, are one such group who have the timeless songs and the millions of loyal fans that still clamber for them as if they were touring a debut record. And the tracks sound, almost, as good as they always did. 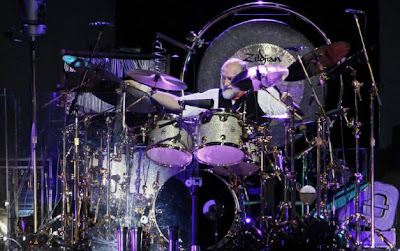 They hit the home runs early: 'The Chain', probably the best and most iconic thing that Lindsey Buckingham, Stevie Nicks and co ever recorded, warmed everybody up, before 'Dreams' teleported the crowd back to 1977. Indeed, a sentimental trip down memory lane with Nicks, to humble beginnings in San Francisco – "back to the way we were" - preceded 'Gypsy' and had the audience thinking about digging out their 'Rumours' LPs and 70s party gear for Halloween.

Nicks' instantly recognisable voice is still in fine condition, as are Buckingham's fingers. As well as a solo acoustic version of 80s single, 'Big Love', some instrumental highlights from the just-turned-60-year-old showed that, despite its mammoth pop success, Fleetwood Mac are a rock band at heart . As well as the savage guitar playing, there was some tenderness, too. Moments before, the former lovers had shared an emotional embrace that will long live in the memory.

The age demographic of the audience at this show spoke volumes about how great – truly great - music transcends and has the ability to touch anybody willing to listen. From the golden oldies who were there at the time, to the teenagers looking to reconnect to the music they listened to in their parents' car as a kid; everyone was enthusiastically enjoying themselves.

The high point of the night (along with a rarely played, but gorgeous, 'I Have Always Been A Storm') was an elongated version of 'Go Your Own Way', which produced a huge reaction and mass sing-along from the sell-out crowd, Buckingham bending down to allow those in the front row to get their hands on his guitar.

Aside from the absence of the Christine McVie-penned, 'Little Lies', and co-founder Mick Fleetwood briefly seeming to lose his mind during a customary drum solo, it was a rousing performance from one of the biggest-selling acts of all time.

This night, climaxing with the classic, 'Don’t Stop', and this tour, has been a hugely successful reunion for a band whose career has been an emotional rollercoaster. There seems to be a new appreciation, both for the music that made them great, but, more importantly, for each other. And long may that continue.
Nickslive at Monday, November 02, 2009
Share