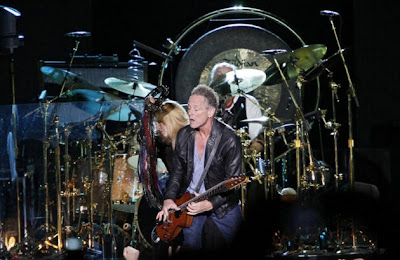 
THE band once famed as much for their turbulent relationships as their chart-topping success returned with a vengeance to prove that great music is more important than who's sleeping with who.

Fleetwood Mac has seen multiple line-ups and musical change since first forming in 1967, but a delighted Manchester crowd were treated to their best-selling Rumours team of Stevie Nicks, Lindsey Buckingham, Mick Fleetwood and John McVie, missing only the now-retired Christine McVie.

Looking good and sounding even better, the band showed their tumultuous past was behind them as they delivered almost two-and-a-half hours of top songs with perfect chemistry, tremendous energy and above all fun and vigour.

"We don't have a new album to promote… yet," Lindsey Buckingham teasingly told the audience. "So we thought let's go out and have some fun. "We're going to sing the songs we love - and hopefully you do too."

He even made a cheeky reference to the band's inter-relationships by saying: "As you all know, Fleetwood Mac has a complex and convoluted emotional history".

But although the former lovers may no longer share a personal spark, the magic of Stevie and Lindsey's voices blending together in perfect harmony was there in full force.

Everyone seems to be friends again and the pair even shared a tender embrace.

Seventies sex symbol Stevie is still stunning at 60 and is as blonde-haired, mysterious and bewitching as ever and charmed the crowd from the moment she stepped on stage.

Her melodic voice was hypnotic and haunting and had just the right mix of vulnerability and strength to deliver songs like Gypsy, Sara, Landslide and Dreams with true emotion.

Wearing a flowing gypsy-style black dress and black boots, later changing into a ruby red dress with a gold shawl and then even appeared in a top hat as she swayed, waved a tambourine and did her trademark twirls during the music.

Lindsey was a real live wire and his sheer energy and enthusiasm revealed his guitar playing genius and fantastic singing.

His impressive fingerwork during Big Love and scorching riffing during the early blues Fleetwood Mac number Oh Well had fans on their feet to give him a standing ovation.

Since forming, the only thing that hasn't changed in Fleetwood Mac is the rhythm section of Mick Fleetwood and John McVie.

Mick Fleetwood's famed ponytail which was on the Rumours album cover may now be white, but his enthusiasm and entertaining personality hasn't waned at all.

He came across as a real character and wearing drawstring pants and bright red shoes, he played the drums with passion and skill coupled with comical facial expressions and was superb during a drum solo.

In contrast, John McVie was quiet and calm as he played his bass with skill.

With the footstomping Tusk, the singalong Don't Stop, Go Your Own Way, Rhiannon, Say That You Love Me, Gold Dust Woman, World Turning and Silver Springs among the many songs delivered, fans simply could not have been disappointed.

But with such an extensive back catalogue to choose from, tracks such as Seven Wonders, Everywhere and Little Lies weren't there and the band could have played a whole other set of the great songs they didn't do.
Nickslive at Monday, November 02, 2009
Share