PLATFORM SEATING OVER LAKE AT BOWL OF BROOKLANDS REVEALED 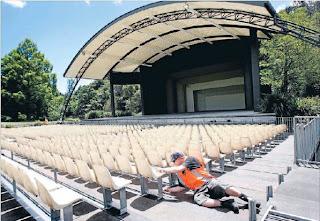 
THE six-year-olds of New Plymouth’s Frankley School had mixed opinions of the temporary seating platform installed for the first time over the Bowl of Brooklands lake yesterday.

Work on the much-debated platform began on Monday and should be mostly finished by today.

It adds more than 1000 premium-priced seats to the Bowl’s capacity and will be used at the weekend’s two Fleetwood Mac concerts.

Tickets on the platform cost $320 and Poppy Johnson, 6, reckoned it looked cool.

She particularly liked the light brown plastic seats, which have been used at various venues around the North Island before finding a home here.

Sophie Dempster, 6, also thought the platform looked ‘‘nice’’ but did not know who Fleetwood Mac was and neither did Harry Clegg, 6, who had other things on his mind anyway.

‘‘My friend Cooper is an alien and his parents are too and they have a spaceship under their trampoline,’’ he said, despite Sophia Longstaff, 6, telling him Cooper’s parents had just been joking.

Tina Johnson, mother of Poppy, said she was pleased with the look of the platform though suspected she was one of the few.

‘‘They think it’s against the whole spirit of the Bowl. I think it is a good way to stop the silly buggers jumping in the water and getting electrocuted,’’ she said.

Neale Kendall, the man overseeing the installation of the platform, said his company Acrow Ltd had put in temporary seating in all sorts of venues around the North Island. 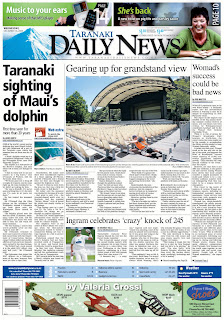 However, putting them in over a lake was a first.

‘‘The boys brought up waders, had their tetanus shots, got the insect repellent and sunscreen. This is a job we didn’t want to take lightly.

‘‘We are the last link in the chain and if it doesn’t go right, unfortunately it’s my head on the block. Saying that, I’m very confident it will be OK,’’ he said.

Work on removing the platform will begin on Monday.

Brookland’s Zoo is closing at noon on Saturday and all of Sunday this weekend.

‘‘Pedestrian and vehicle traffic will be restricted before the concerts start so the zoo will be closed as well,’’ zoo spokeswoman Eve Cozzi said.

Public vehicles must be out of the zoo’s carpark by noon on Saturday to enable the Bowl’s setup to be finished by the time entry to the venue’s holding areas open at 5pm.