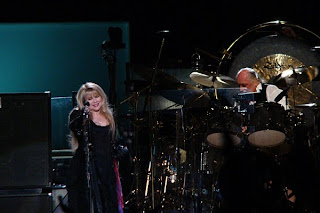 The Mac's back
By: JOSHUA HOEY
Photo Gallery
WAToday


The BBC comedy The Mighty Boosh has a running joke about Fleetwood Mac's 1979 album Tusk.

And while the capacity Brisbane Entertainment Centre crowd last night was not treated to the full length of the album "in its entirety, with the pauses, as Lindsey Buckingham intended it to be heard", they did go wild for the album's title track.

The song's strange syncopations and tribal drum rhythms produced an impassioned and enthusiastic response among the crowd that was characteristic of last night's performance.

This reviewer has never seen a more rapturous Brisbane crowd.

Each song was followed by an almost overwhelming roar of applause, shouting, and cheering, and by the end of the night standing ovations had become commonplace.

The band performed some of their lesser-known tracks, but classics like The Chain, Dreams, Rhiannon, Sara, Landslide, Go Your Own Way, Don't Stop and Everywhere dominated the set list. 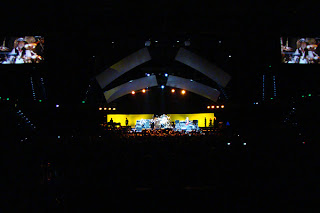 Mick Fleetwood's recognition of Lindsey Buckingham as the band's "maestro" was apt - the lead guitarist's solo performance of Big Love roused the entire arena, impressive considering he performed it on a classical six-string guitar.

As is to be expected from a seasoned performer, Buckingham has consummate control of his craft, easily modulating between tender, mournful picking, and unimpeded, raw aggression.

But, the true star of the night was always going to be Stevie Nicks.

The band's frontwoman, dressed in her trademark shawls and gypsy dresses, enraptured fans with her performance.

Shouts of adoration and support for Nicks could be heard throughout the show.

At times Nicks slightly adapted the melodies of some tracks, but her iconic voice, with it's dark, melancholic timbre, was as powerful and compelling as ever.

Often revival tours have a certain haggard, worn atmosphere, but there was nothing of the sort at last nights performance.

And calling the tour a "revival" isn't really accurate anyway - Fleetwood Mac have never been in the need of rejuvenation.

They are, simply put, one of the greatest rock groups performing today.
Nickslive at Tuesday, December 15, 2009
Share