The Case for a Mac Attack
Review by: Judge-Jury

Mick brought a big set of drums and slim, attractive backup singers who dressed like Matrix refugees. Lindsey brought a large selection of guitars and an Art Garfunkle look. Stevie brought her portable wind generator, her tambourine and a few hundred outfits. New Plymouth brought the rain – especially for the concert. 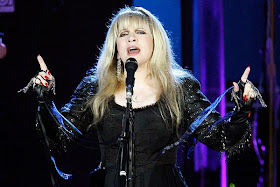 Yup, basically as soon as Fleetwood Mac hit the stage (and the DomPost was there - the photo is theirs), the rains decided to join in the fun (ironically, the Sunday show, which was always meant to be wet, ended up quite dry - apparently). The rains played coy as we claimed our spot on the grassy hillside in New Plymouth’s Bowl of Brooklands, and they stayed away through the country and western warm up act (from Lyttleton!) though they may have been fighting queues to get food and t-shirts, but then they came back with a vengeance for the main act. But that didn’t really seem to bother anyone.

Even me, and I detest getting wet. We were lucky to have claimed a spot that was somewhat shaded by a tree, though still on the gentle slope in front of the stage rather than on one of the more precipitous banks around the venue. Our view of the stage and the screens (once everyone stood up) was incredible, and then of course there was the music itself.

I do not claim to have particularly distinguished music taste, as I know my preferences are fairly middle of the road. But everyone at the audience, from the nearby chain smokers to the nearby potheads, from the sensibly dressed women with wine in their hands to the rough and tumble buzzcutted lads with their ciggies and beer, and from those who remembered the 60s and 70s to those who barely remember the 90s, the entire crowd were thrilled to see this group, and revered the music they performed.

And the devotion was not misplaced. If we were worshippers of the band, Stevie Nicks was the high priestess, and her every word was met with a hush that poor Lindsey Buckingham never got during his pronouncements. But then, his words were not his most impressive contribution: I was almost ready to call CYFS, with the way he abused his wee guitar. The whole crowd sang along to the major hits, but stayed respectfully quiet as Ms Nicks performed her slower songs. I did not think she would perform “Landslide”, which is one of my favourites, so I was pleasantly surprised then it began, and while the Dixie Chicks version is incredible, the performance by just Ms Nicks and Mr Buckingham doing a guitar solo totally blew my mind. Others got more worked up over the other “surprise” inclusion an 80s effort (the name of which escapes me), which gave Ms Nicks yet another chance to change her outfit and twirl around the stage. They never did get around to playing “Seven Wonders”, which is one of my favourites, but with songs like “Gypsy”, “Rhiannon”, “Go Your Own Way”, “Say You Love Me”, “Sarah”, and “Don’t Stop” all performed amazingly, I really didn’t end up caring.

I seem destined to always enjoy major concerts in the rain (like Bowie), but New Plymouth’s rain was nowhere near as windswept and driving as the Wellington version (wimps). The band were very complimentary about the audience’s staying power and even started 15 minutes early, though they still expected two encores rather than just having one big finale set. But when one of those songs contained an incredible drum solo by Mr Fleetwood, when he earned his genial giant reputation by getting the audience somewhat involved (though he was hard to understand through all the sweat and energy he was putting into his efforts), then its really hard to feel annoyed.

And who am I to quibble or complain? The show was absolutely incredible. Leaving the event turned out to be a slip slide health hazard, and people were screaming animal calls rather than attempting to murder the songs we had just heard performed so expertly (a la “Roxanne” at the Police concert), but, sodden as I was, I left with a (potentially second hand pot fuelled) buzz that I still feel somewhat with the distance of time and space. It was a totally worthwhile experience, and one of the greatest pre-Christmas presents I could ever have wished for.

Verdict: Legends came to life in the ‘Naki and Fleetwood Mac did not disappoint. Should they come back again (as they promised to do), or Stevie tour solo again (I still kick myself for missing her last tour), I will have to make a pilgrimage to wherever to experience their magic again. 7 Wonders out of 7, no matter the weather.