SLIM CHANCE OF GETTING UP-CLOSE TO FLEETWOOD MAC

RARELY seen in Taranaki, the ways of the famous were in full force for Fleetwood Mac’s weekend visit.

Arriving on a jet bigger than the passenger planes that service the region, the band was met on the tarmac by four silver Mercedes Benz sedans, a Porsche Cayenne SUV and four Toyota people movers. While the big stars, Mick Fleetwood, Stevie Nicks, Lindsey Buckingham and John McVie, jumped into the flash cars, the lesser members of the entourage filled the Toyotas.

Fans and the two media representatives were kept behind a fence more than 50m from the action.

This put the rockers out of earshot and better seen through a photographer’s long lens. When the convoy did leave the airport several of the band covered their faces lest the fans with their aimand-shoot cameras and the one newspaper photographer caught a picture of them through the tinted windows of their fastmoving cars.

The level of secrecy was not appreciated by some, who were quick with tales of Billy Connolly and Tom Cruise mixing with the locals with little pretension when they visited. At the Saturday concert the was one of just a handful of news organisations attending.

The reporter was allowed in for the whole concert but the photographer had just the first three songs to snap his pictures before being escorted to the gate.

On Sunday no media passes were issued, despite requests for at least two for this newspaper. 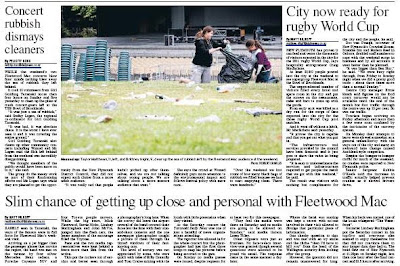 ‘‘They feel the media were there on Saturday and no media are going to be allowed on Sunday,’’ said media liaison Leesa Tilley.

Other requests were just as fruitless. No face-to-face interview was granted though several questions were allowed to be posed via email. The response came in the same manner a day later.

Where the band was staying was kept a secret with no-one involved in their visit allowed to divulge that particular piece of information.

One cheeky question to that end was met with an icy smile and the cliche ‘‘then I’d have to kill you’’ from the head of the Wellington security firm looking after the group.

However, the question did not remain unanswered for long. When his back was turned, one of the locals whispered ‘‘The Waterfront’’.

Guitarist Lindsey Buckingham put the Saturday concert in his top-five and everyone else seemed to enjoy themselves but that did not convince them to stay longer than they had to. The band flew out of New Plymouth at 11.30pm on Sunday night, less than one hour after the final concert and 31.5 hours after arriving.