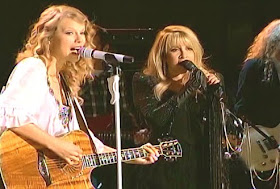 Taylor Swift Shares The Stage With Stevie Nicks At The Grammys
After 'Today Was a Fairytale,' Swift is joined by the former Fleetwood Mac singer for 'Rhiannon' and 'You Belong With Me.'
By Eric Ditzian
MTV.COM

Little over an hour after accepting the Grammy Award for Best Country Album, comparing the win to an impossible dream, Taylor Swift took the stage at the Staples Center to perform a medley of her own tunes, as well as a song from one of her childhood heroes, who joined her onstage.

Ditching her sparkling evening gown for a more casual blouse-and-jeans combo, Swift took center stage with her guitar strapped to her shoulder for "Today Was a Fairytale." Swift then announced, "It's a fairly tale and an honor to share the stage with Stevie Nicks."

The former Fleetwood Mac singer then walked onstage. The two stood side by side, singing Fleetwood's "Rhiannon," at times a tad less harmonically than one would have hoped. Nonetheless, the women made for a compelling twosome, a portrait of two generations separated by years but drawn together by music.

Swift then grabbed her guitar for the third and final part in her medley, jumping into a twangy version of "You Belong With Me." Nicks stood back, tapping her tambourine and nodding in appreciation, every so often stepping up to the mic to share singing duties with the young artist.

At the end, Swift and Nicks embraced. It would have already been a killer night for the 20-year-old singer: Before her Best Country Album win (Fearless), she notched victories for Best Female Country Vocal Performance and Best Country Song ("White Horse"). But there's a lot more still to come, including Swift's battle for Album of the Year against Beyoncé, the Black Eyed Peas, Lady Gaga and Dave Matthews Band.


Taylor Swift Duets With Stevie Nicks at the Grammys
Spinner.ca

It was a pairing with a legend and one in the making, as Fleetwood Mac's leading lady Stevie Nicks joined Taylor Swift onstage at the Grammys. Earlier in the evening, Swift described Nicks as "her hero" and she opened her performance with 'Today Was a Fairytale,' playing a quick version on the acoustic before bringing out Nicks for Mac's 'Rhiannon.' 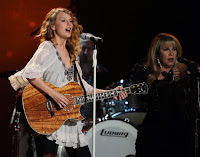 "It's a fairytale and an honor to share the stage with Stevie Nicks," she said as Nicks walked out. The version was cut short so they could duet on a banjo-driven version of Swift's hit 'You Belong With Me.' Throughout the performance, Swift and Nicks were making constant eye contact, with Swift dancing up close to her while strumming the guitar and Nicks playing the tambourine.


While Fleetwood fans probably wouldn't say this was Nick's best vocal duet, it was still one of the nicer surprises of the evening. Earlier, Swift took home the Grammy for Best Female Country Vocal. 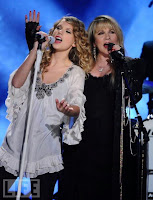 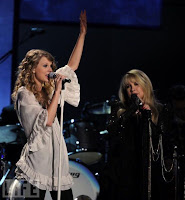 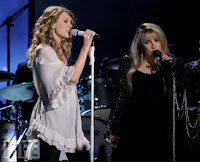 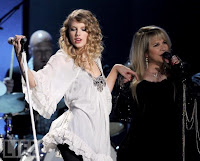 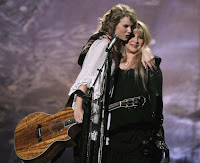 Taylor Swift and Stevie Nicks' Grammys duet: Out of sight, or out of tune?
by Clark Collis
Entertainment Weekly


The last thing I want to do is ruin another awards ceremony for Taylor Swift. But there’s no doubt that someone was badly off-key during the version of Fleetwood Mac’s “Rhiannon” that the country superstar just performed with Stevie Nicks at the Grammy Awards. And I’m afraid my money’s on Taylor. Moreover, I’m not the only person at the Music Mix who cringed at the sight of Stevie acting as Taylor’s backing singer on “You Belong To Me.” As one of my colleagues just emailed me: “Stevie Nicks is the ‘Gold Dust Woman,’ goddammit!”
Nickslive at Sunday, January 31, 2010
Share