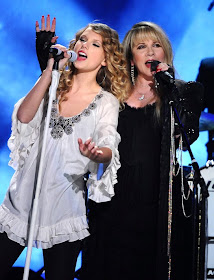 
"Trotting Stevie Nicks out to sing “Rhiannon” with Taylor Swift was meant, one assumes, to suggest that Swift is to her generation what Nicks was and is to hers. That was tough to swallow once Swift started singing the Fleetwood Mac tune next to the gravel-voiced but still spot-on Nicks—Swift was out of tune and her tone was thin and reedy. Swift fared better on her own when the pair went into the younger singer’s “You Belong To Me,” though the nursery rhyme-like melody left Nicks without much to do".


I had a blast, it was so fun. And it was great being onstage. You could tell by watching me: I was dancing like a… a… jerk, basically. I was elated to hear this huge pop star doing my version of her song. And performing with Stevie Nicks (who sang with Swift on both “You Belong With Me” and Fleetwood Mac’s “Rhiannon”) didn’t suck either.
Was there a problem with the sound onstage? There seems to be a wide consensus of opinion that Taylor was struggling to find the right notes when she was singing “Rhiannon.”
I didn’t really notice it being out of key that much. But I guess the TV doesn’t lie. I think a lot of people give her unnecessary grief. Her appeal is not in [having] some sort of big diva voice. Like, Pink obviously has a voice of God coming out of her when she sings and it’s beautiful and it’s powerful and bluesy. Taylor comes from country. It’s a difference approach to singing.
It must also be pretty terrifying to perform with Stevie Nicks for a global audience.
There is that factor, you know. How about anybody try doing that without being nervous? It wasn’t even my show and I was nervous.
Taylor Swift Duet with Stevie Nicks at 2010 Grammy Awards Worst Ever?
Taylor Swift Won Four Grammy Awards but Couldn't Compete with Vocals of Stevie Nicks
Associated Content 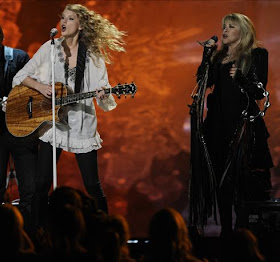 One of the more persistent rumors circulating before the 2010 Grammy Awards aired was that Stevie Nicks would appear, with some mentioning that she would do a duet with young country pop phenom Taylor Swift. With the confirmation that Lady Gaga and Elton John were opening the Grammy Awards ceremony, anticipation grew that the Stevie Nicks rumor would prove to be true as well. And it did. But what looked to be a promising duet left that promise unfulfilled and the quadruple Grammy-winning Taylor Swift sounding far out of her vocal league.
Ryan Seacrest, host of American Idol, introduced Swift after prefacing her performance with the announcement that she had already won three Grammy Awards (she would end up winning a fourth, Album of the Year). The young starlet began by singing a couple of lines from her song "Fairytale," then introduced Stevie Nicks to wild applause as the music to Fleetwood Mac's classic, "Rhiannon," started up.
Stevie Nicks is the consummate performer, her voice a unique blend of smooth and gravel. But when Taylor Swift stepped in to sing a few lines of "Rhiannon," her reedy, almost flat vocals stood at stark contrast with Nicks'. And as the song progressed, as Taylor Swift kept producing flat renderings (except in the harmonies, which were done fairly well), it became glaringly apparent that Taylor Swift's level of vocal stylings paled in comparison to that of Stevie Nicks.
Sadly, it went from bad to worse. When Taylor Swift sang her hit, "You Belong With Me," Stevie Nicks stepped back, providing back-up vocals and keeping time on a tambourine. And although the song sounded a bit better than "Rhiannon" (possibly because it was recognizably Swift's own song), the flatness in her voice continued. The entire performance came off as if a delusional Stevie Nicks were letting her pretentious and marginally talented niece take the stage...
Unfortunately, anyone who has ever seen Taylor Swift perform live can attest that she always performs that way...
Nickslive at Monday, February 01, 2010
Share