WE CERTAINLY DIDN'T GET MUCH NICKS LAST NIGHT 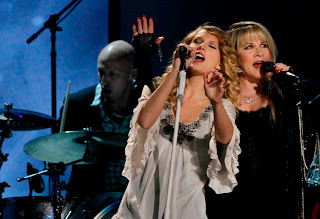 It's not all about the music
Ann Powers
LA Times


Today's biggest stars are those who embody powerful archetypes so well that a misplaced note or two may be kindly overlooked.
That last situation applies to Taylor Swift, who continued her winning streak by taking home album of the year for "Fearless," a recording that has seemingly won every available prize in the last year. Swift, 20, is a songwriter; she thanked her record label for "letting me write every song on my album" while accepting one of her awards.
But as well-crafted as her platinum-selling tales of suburban high school life are, it's Swift's persona that really sells. This smart young woman comes across as a perky, living American Girl doll, and that appealing version of traditional young womanhood, not her music, is at the heart of her stardom.
Her singing certainly can't be credited. Appealing enough on record, it always seems to let her down live. Swift gave a strikingly bad vocal performance at Staples Center on Sunday, sounding tinny and rhythmically flat-footed as she shared the microphone with the distinctive Stevie Nicks. Swift's inability to match or support Nicks as they worked through a medley of each woman's hits stood in stark contrast to the evening's other pairings, particularly soul man Maxwell's sensitive response to Roberta Flack and Lady Gaga's bravado turn with Elton John.
Taylor Swift and Stevie Nicks
Time.com
Taylor Swift isn't even old enough to drink legally and yet the country-pop crossover picked up four Grammys, including Best Album of the Year. Man, I have done nothing with my life.
But something is off in her performance. Swift doesn't sound her best, especially in comparison to Stevie Nicks, her duet partner. And who made the decision to let Nicks sing a high school love anthem? Really, Stevie — you feel like you're the type of girl who's left sitting on the bleachers? The duet seems more like a p.r. stunt than a true performance. But I really like Nicks' ridiculously ribboned tambourine, so maybe I'll forgive her.
10 Things I Learned from the 2010 Grammy Awards Show
Accociated Content
#2 Steve Nicks doesn't mind being a backup singer. You'd think at a show like this, there wouldn't be enough space for all of the egos in the room. Still, I was surprised to see the legendary Stevie Nicks play second fiddle to Taylor Swift during their duet together. It seemed as though Stevie only sang a few bars of her hit song Rhiannon by herself before Swift quickly swooped in and dominated the performance. Maybe it was supposed to be that way. It was just surprising, since we haven't seen much of Nicks lately and we certainly didn't get to see much of her last night.
Nickslive at Monday, February 01, 2010
Share