LIVE IN THE STUDIO WITH FLEETWOOD MAC 35TH ANNIVERSARY 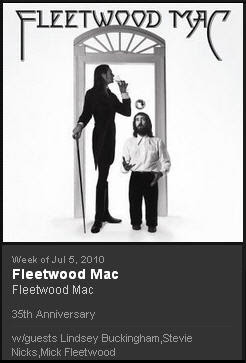 Live In The Studio with Redbeard
This week's show:
FLEETWOOD MAC
35th ANNIVERSARY OF THE RELEASE OF "FLEETWOOD MAC".
(July 11, 1975)
U.S. Syndicated radio show InTheStudio celebrates the 35th anniversary of one of rock's most pivotal album's the 1975 FLEETWOOD MAC album. Show producer and host Redbeard speaks to Mick Fleetwood, Lindsey Buckingham and Stevie Nicks about the first Fleetwood Mac album featuring Buckingham/ Nicks and how this line-up change along with a new producer transformed Fleetwood Mac forever. This show airs broadcast week of July 5th. To find out where to listen or to LISTEN online visit: www.inthestudio.net
You can hear a snip-it of the interview on the In The Studio site. It's not a new interview with the band members - it's archival footage from previous interviews. Still... I'm a sucker for any interviews.... I've got stacks of them on discs...
In The Studio will eventually have the interview up on their site to stream after its traditional radio run, which is all this week... If you don't manage to catch it on your local radio station keep checking their site for updates.
One website that you can stream live in the US and outside is: WKTG (link). They'll be broadcasting this show on Sunday July 11, 2010 at 9am local time. The station is located in Madisonville, KY
Nickslive at Monday, July 05, 2010
Share