STEVIE NICKS IN THE STUDIO PLAYING TAMBOURINE.. PHOTO BY @DaveStewart

This is Dave's last day in the Studio with Stevie, he's off to Nashville to start work on his own album.  Not sure if his work is done here with Stevie or if he comes back to the project after Nashville.  If not, then it appears the initial recording of the material is finished and what's left to be done is the mixing, mastering and all that other fun stuff I know nothing about - but know can take months to finish.
She looks amazing!
The Magic Lucky Photo that Stevie put on the mixing desk....
Photo by: DAVE STEWART 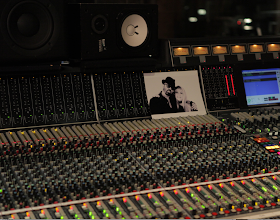