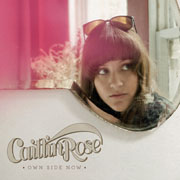 Add Nashville's Caitlin Rose to the ever-expanding list of American artists finding more welcoming arms -- and critical acclaim -- across the pond in the U.K. and Europe. While her new album Own Side Now draws stellar four-star reviews in London ("more than lives up to expectations...lovely stuff" -- Q, "major star alert" -- The Guardian) and gets an opening slot on the current Deer Tick U.K. tour, we wait patiently for a U.S release. Young singer/songwriters with a twang and an appreciation for alternative and traditional country styles (and who don't fit into the Nashville star-maker machinery) too often get neglected or pigeonholed. It's a shame, too. The fine, promising Own Side Now deserves greater exposure -- even in her own backyard.
Rose's debut has the classic rural tones of a Patsy Cline but this is a distinctively contemporary album in both lyrical depth and brash defiance of any particular one-note style. There are country/pop elements of Emmylou Harris and Linda Ronstadt along with a version of the Fleetwood Mac/Stevie Nicks song "That's Alright".