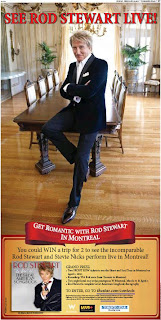 The Toronto Star is giving away a trip to Montreal to see the incomparable Rod Stewart with Stevie Nicks in concert as part of the Heart and Soul Tour.
Roundtrip VIA Rail tickets from Toronto, deluxe accommodations at W Montreal and two tickets to the show, plus Rod Stewart's The Great American Songbook discography.
The Contest begins on February 9, 2011 and ends at 11:55 p.m. ET on February 20, 2011
Prize: There is one (1) prize to be awarded, consisting of:
Two (2) premium tickets to the Heart and Soul Tour concert in Montreal, Canada on April 1, 2011, two (2)-nights accommodation (one room, double occupancy) at W Montreal hotel in Montreal on March 31 and April 1, 2011, return first-class VIA Rail tickets for two (2) from Toronto to Montreal and one (1) Great American Songbook discography. The approximate value of the Grand Prize is $2,000.00 CDN.
Enter Here
Contest Rules
Nickslive at Monday, February 14, 2011
Share